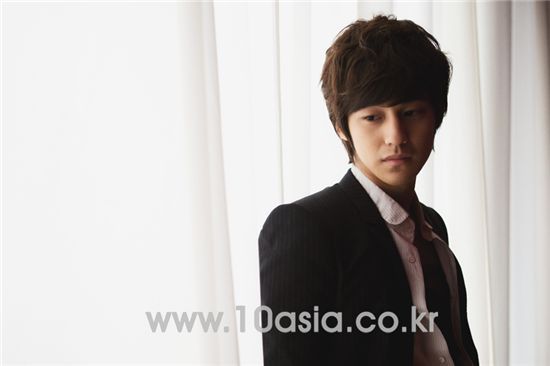 Kim Beom has grown as an actor everytime we see him. The young boy that first appeared in 2006 TV series "Rude Women" as a child who takes good care of his single mom, made himself known to the public through MBC sitcom "High Kick!" and made his presence more prominent through just a few series of appearances in the beginning of "East of Eden" playing the child part of Hallyu star Song Seung-heon. It became certain last year that he had secured a position on the small screen when he made the hearts of many female viewers flutter through KBS drama "Boys over Flowers".

Kim then showed how he had finally become a 'man' and one that is ready to play a lead role through SBS TV series "Dream - Drama". "Expressing a character is similar to trying on different clothes. The characters I played in 'Boys over Flowers' or 'Dream - Drama' were articles of clothing I tried on as a hanger or mannequin. They may not fit me initially since they may be too long or short but there comes a point when it fits you just right after some adjustment. That is when you look at yourself in the mirror and start being evaluated by others too for how you look in that item of clothing. Taking on a new role is like adding a new piece of clothing to your wardrobe so I must say that I'm very eager when it comes to work".

That is why although Kim has a fully-packed schedule, he fails to tire out or as he jokingly says has "no time to become infected with the influenza virus". Kim said love is the only thing he would be willing to exchange for work and recommended films about love which moved his heart.

"It'll look like the average love story between a man and a woman but I liked this movie because of the unique way in which it unraveled its story. We all regret certain things we've done in the past, although there is no way to undo them in reality. But the male character in 'If Only' was able to go back in time by a day that was crucial to him and sacrifice himself to protect his woman. I think my character Shi-beom from 'Emergency' was similar to him in that sense. I think I'd definitely be able to do that for the person I loved".

The gap between man versus woman and romantist versus workaholic is something that is quite difficult to close on in. Samantha (played by Jennifer Love Hewitt) and Ian (Paul Nicholls) love each other so much but get hurt or feel stifled by the other person who is so different from the other. Ian then realizes the importance of Samantha after being told by a cab driver to "appreciate her what you have" but is unaware of the devastating events which would occur thereafter. "If Only", which starts off with its thesis 'If only we could live that day again', leaves a lasting ringing in the viewer's heart from deep inside.

"Romantic love isn't the only form of love that exists between a man and woman. 'I am Sam' is a film which, very extremely beautifully and touchingly depicts on the love between a parent and his child. I was to able to realize how great a parent's love is by watching this movie since I myself haven't spent much time with my own because I had been working since an early age. Sean Penn's acting as a mentally challenged father was great to the extent that it was shocking and you'll be able to see a cute Dakota Fanning from when she was young".

One day, Sam, a man with a mental capacity of a seven-year-old, has to start raising Lucy, a daughter he had with his past woman. However, Lucy is taken away from him after social workers judge that Sam is incapable of raising a child due to his disability. He then decides to put up a fight in court to win back his daughter. Sean Penn and Dakota Fanning tell this endearing and heartbreaking story vividly with their superb acting.

"This time, the movie is about the affection between a teacher and his student. I heard that the film is based on the true life story between Helen Keller and her teacher Anne Sullivan. But in 'Black', the teacher is also a father, a friend and a sweetheart to the main character. I liked the unique atmosphere it has as an Indian film and the acting was really good too. I was moved in particular by the scene where the main character helps her teacher learn what water is by touching the rain when he later develops Alzheimer's disease because the first word she herself had learned to say was 'water'.

Debraj Sahai (played by Amitabh Bachchan) approaches Michelle (Rani Mukerji) who is blind and deaf, claiming that he is a 'wizard'. Michelle grows up as a woman of great character thanks to Sahai's efforts and love, but the two face a new obstacle when Sahai develops Alzheimer's. "Black" is the story of Helen Keller's devoted teacher Sullivan brought to life through the big screen.

4. "You are my Sunshine"
2005│Park Jin-pyo
"I think about a lot of things from an actor's point-of-view while watching movies since turning an actor myself. I analyze everything -- how a movie is created, what the director's taste is, what style the actor or actress acts -- so instead, it's become more difficult for me to enjoy the movie itself. But unlike 'Black' or 'I am Sam' which is about overcoming certain disabilities, 'Sunshine' was about the main characters who shared a love so great that they were willing to live with an illness which could be contagious so I was able to become really immersed with the movie".

Seok-joong (played by Hwang Jung-min), a pure-hearted farmer living in the countryside, one day meets Eun-ha (Jeon Do-yeon), the woman of his dreams. The two marry but their love faces a critical moment when Eun-ha tests positive for aids, revealing her past life as a prostitute. The film makes the onlooker pour out tears after showing the process of how conventionality turns into universality then irresistability.

5. "The Letter"
1997│Lee Jeong-gook
"Love is actually an emotion we question endlessly throughout our entire life. I think that's why films place obstacles within their stories -- to express the various aspects to love. And that's why the aforementioned films were fun and touching. They showed the process of how the main characters overcome those obstacles. But 'Letter' left a strong impression on me in that it helps one of the two main characters overcome their sadness after the other dies. It also showed me another side to love".

Korean literature graduate student Jung-in (played by Choi Jin-sil) falls in love with Hwan-yoo (Park Shin-yang) who finds a wallet she had lost. The two get married but Hwan-yoo dies, making Jung-in believe she is at lost until a letter arrives at Jung-in's mailbox one day. "The Letter" is a film in which the beautiful scenery from The Garden of Morning Calm, late actress Choi Jin-sil's pure beauty and Park Shin-yang's delicate and composed acting harmonize beautifully.

"Kim Beom's Movie Picks"
by HanCinema is licensed under a Creative Commons Attribution-Share Alike 3.0 Unported License.
Based on a work from this source