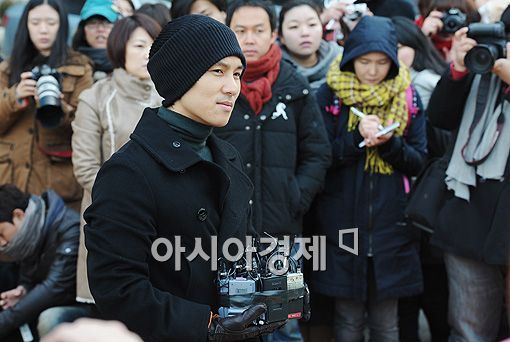 Shinhwa member Kim Dong-wan speaks to fans and reporters after being discharged from the military in Seoul, South Korea on December 7, 2010. [Lee Ki-bum/Asia Economic Daily]

The 31-year-old singer of the group had served as a public service worker at a district office in Seoul since December 2008.

"I am really happy to be discharged from the military and glad to begin working again", Kim said in front of reporters and fans who gathered to see him. "I will make my return in Korea in January of next year and till then, I will pursue my activities in Japan starting with a fan meeting".

He went onto explain that his appearances on television have yet to be finalized while thanking fans for coming out to see him.

Kim made his debut as one of the lead singers of the six-member boy band Shinhwa in 1998. He also branched out into other aspects of entertainment, appearing in several dramas including "A Farewell to Sorrow" (KBS, 2005) and "My Dearest Love" (SBS, 2007) and movie "Spin Kick" (2004).

He will also sign with agency Live Works Company, who is in charge of managing fellow Shinhwa member Shin Hye-sung and songstress Sunmin, and hold a fan meeting in Seoul at Sangmyung University's Sangmyung Art Center on December 9. 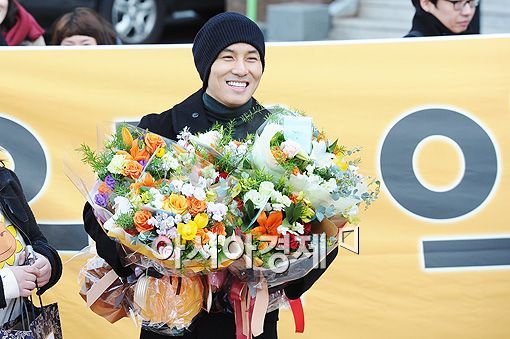 Shinhwa member Kim Dong-wan smiles after receiving flowers from his fans upon his discharge from the military in Seoul, South Korea on December 7, 2010. 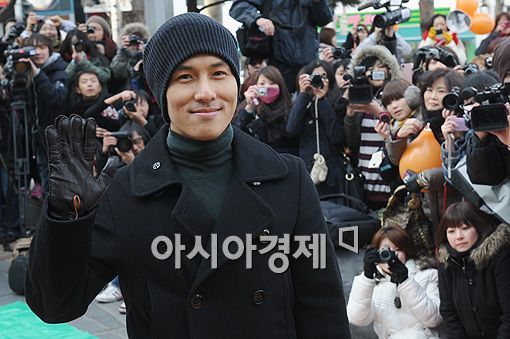 Shinhwa member Kim Dong-wan waves to fans and reporters after being discharged from the military in Seoul, South Korea on December 7, 2010.

"Kim Dong-wan discharged from the military today "
by HanCinema is licensed under a Creative Commons Attribution-Share Alike 3.0 Unported License.
Based on a work from this source