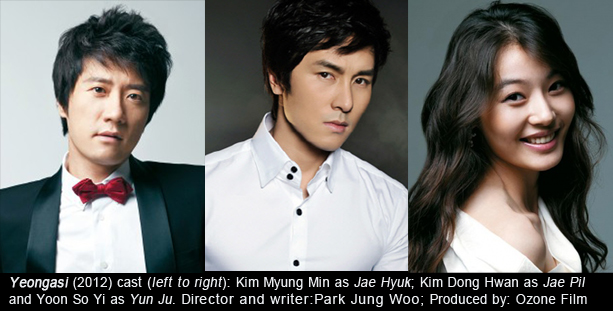 Shinwa member Kim Dong-wan is confirmed to star with Kim Myung-min in upcoming disaster movie, "Yeongasi". This development marks the return of the 31-year-old actor to the big screen after seven years of being active as singer and TV/musical actor.

A source from MY Entertainment, Kim Myung-min's agency said, the singer-actor signed up last week. He was the last among the supporting actors to confirm participation in the movie.

Kim Dong-wan will play the role of Jae Pil, Jae Hyuk's (Kim Myung-min) younger brother who works as a police officer. Jae Pil is engaged to be married to Yun Ju, who will be portrayed by model and actress, Yoon So-yi ("Warrior Baek Dong-soo", (SBS, 2011); "Hero - Drama" (MBC, 2009); "Shadowless Sword", 2005). The couple were introduced to each by Jae Hyuk, who was Yun Ju's senior schoolmate in college.

"Yeongasi" follows Jae Hyuk, a pharmaceutical agent as he battles against parasitic worms devastating the population, including his own family. Park Jeong-woo ("Big Bang", 2007; "Dance With The Wind", 2004) wrote the screenplay and is set to direct the 10 billion won movie. Filming will start on October 25 for an early 2012 release.