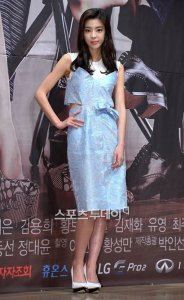 Actress Kim Gyu-ri was cast as artist Shin Yun-bok in "Le Grand Chef" Director Jeon Yoon-soo's next work "Portrait of a Beauty". This movie started with the idea that artist Shin Yun-bok of the Choseon era was really a woman dressed as a man. Although she had great talent, she had no choice but to dress as a man because she was a woman. It is a movie about the love story that surrounds her painting 'Portrait of a Beauty'.

Kim Gyu-ri, who was cast as Shin Yun-bok, will compete with Moon Geun-young, who is currently filming SBS "Painter of the Wind", which is a drama with a similar story.

In order to play the role of the genius artist Shin Yun-bok, Moon Geun-young is learning calligraphy and Korean art.
"Portrait of a Beauty" will start filming on May 31, and will aim to premiere this fall around the same time as "Painter of the Wind", which will air in September.   In the movie, Kim Young-ho plays artist Kim Hong-do, the teacher of Shin Yun-bok who begins to love her as a woman. In the drama, Kim Hong-do is played by Park Shin-yang.

"Kim Gyu-ri, Shin Yun-bok casting - acting competition with Moon Geun-young"
by HanCinema is licensed under a Creative Commons Attribution-Share Alike 3.0 Unported License.
Based on a work from this source