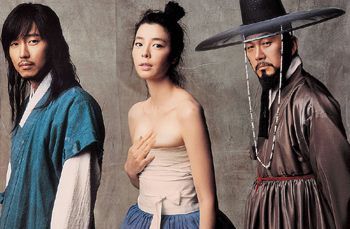 While the life of Shin Yoon-bok, one of the most acclaimed artists from the Chosun Dynasty, is in the spotlight thanks to popular soap opera "Painter of the Wind", starring Korea's sweetheart Moon Geun-young, a film that deals with Shin's life is also coming out.

The movie "Portrait of a Beauty", to be released on Nov. 13, is a romance that deals with ill-fated love over the eponymous artwork that has reportedly hoarded a secret for 250 years.

The movie drew public interest, even at pre-production phase. This is largely due to Kim Gyu-ri revealing a sexiness she has rarely hinted at before, playing Shin Yoon-bok, who disguised herself as a boy to pursue her dream of being a painter.

Kim immediately fell in love with the character, and requested that the Cultural Heritage Administration of Korea let her view Shin's works. Kim studied Shin's life diligently, even going so far as to say she would leave the country if not awarded the role.

"Many people ask me whether I feel pressured by comparisons to Moon's wonderful interpretation of Shin Yoon-bok. While I am a fan of Moon, I am confident I can show another side of Shin not depicted in the TV soap opera", said Kim.
___________________
From left, Kim Nam-gil, Kim Gyu-ri and Kim Young-ho