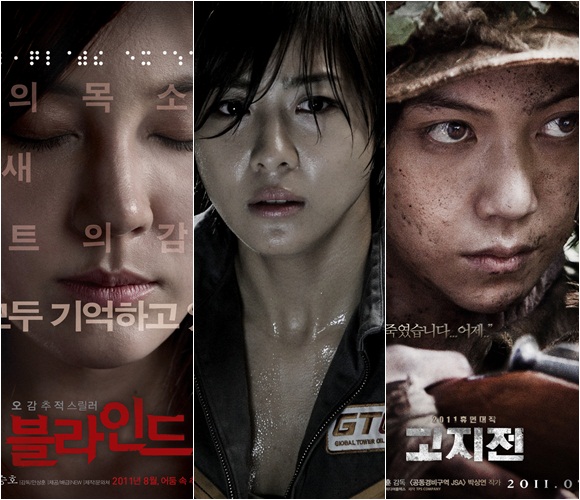 It looks like we'll be able to see actresses fling their bodies for extreme change this coming summer on screens.

Kim Ha-neul, who has been pulling off various characters all this while, will attempt at blind acting for the first time in "Blind" (releasing August 11th). It appears that she has experienced blindness through exhibits, visiting special schools, learning how to read Braille and even learning how to walk with a seeing dog.

As she monitored and improved fixedly looking at one place at once, Kim Ha-neul said, "The fact that I could see was the most difficult part of this acting".

Ha Ji-won is an equipment manager on the ocean floor, fighting with an unknown creature in "Sector 7" (releasing in August). She attempts at action for the second time, following the drama "Secret Garden", as she fights with an unknown creature along with her crew on board a drill ship, "The Eclipse" in open sea. Holding guns and weapons instead of drilling equipment, she'll once again become the female warrior that she is after 'Gil La-im'.

Kim Ok-vin, who has displayed femme fatalism through "Thirst" in 2009, comes back as Cha Tae-kyeong the shooter, the greatest enemy to Shin Ha-kyun and Go Soo in movie "The Front Line".

Her character is a bloody and cold shooter who's nicknamed '2 seconds' because the victim falls 2 seconds before the gun shot. Thinking about the scarcity of actresses flinging their bodies into action movies, Kim Ok-vin's change as a sniper should be something worth seeing.

"Kim Ha-neul, Ha Ji-won and Kim Ok-vin extreme transformation"
by HanCinema is licensed under a Creative Commons Attribution-Share Alike 3.0 Unported License.
Based on a work from this source