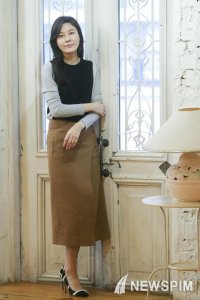 Korean actress Kim Ha-neul, 31, will visit Vietnam, Singapore and Hong Kong to promote her hit film "My Girlfriend is an Agent" and also meet local fans.

"Expectations are high in Asia regarding Kim's future career. This promotion tour will give her the chance to meet her Asian fans in person, communicate with them and further carry out her plans to become an international actor", her agency J.One+ Entertainment said.

Kim will leave for Ho Chi Minh City and Hanoi, Vietnam, Oct. 17 and attend an event for the release of her film. She will meet fans and the press to talk about her career and the movie.

On Oct. 26, Kim will fly to Singapore and Hong Kong where a tight schedule awaits her, including fan meetings, press conferences and promotional events.

"I am nervous and excited to meet my Asian fans. I hope this will be the chance to show what Korean actresses have to offer to the world", Kim said.

Making her debut in 1996 as a model, Kim has enjoyed steady popularity with her friendly smile and reliable acting. Her drama "On Air" (2008), where she starred as the stubborn and bossy top actress, was a big hit both here and abroad, while "My Girlfriend is an Agent" managed to attract more than 4 million moviegoers.

"Kim Ha-neul on Asian Tour to Promote Film"
by HanCinema is licensed under a Creative Commons Attribution-Share Alike 3.0 Unported License.
Based on a work from this source