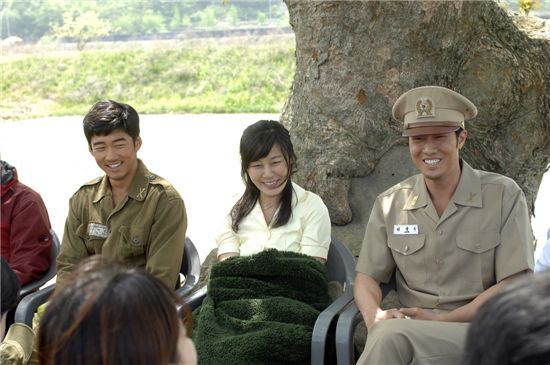 'The promise of friendship and love that is fulfilled 60 years later' is the main copy for upcoming MBC series "Road No. 1" which is set to air on June 23. The drama shows the the turbulent times of the Korean War, but its story revolves around the three main characters Jang-woo (played by So Ji-sub), Soo-yeon (played by Kim Ha-neul) and Tae-ho (played by Yoon Kye-sang) who experience love and friendship during the chaos of the war. The audience is probably expecting more from the three actors since the star-studded cast is already bringing enough attention to the drama. Will the stars be able to pull off the roles of ordinary characters Jang-woo, So-yeon and Tae-ho who are faced with the war? Below are the excerpts from the press conference attended by actors So Ji-sub, Kim Ha-neul and Yoon Kye-sang.

10: The faces of the male actors have gotten very tanned -- it shows that you were faced with many hardships. Both of you look rugged as well.
So Ji-sub (So): I have gotten very tanned and also have heavy makeup on. I lost three kilograms and some of my muscles too because unlike in other productions, I can't have the image of being in shape.
Yoon Kye-sang (Yoon): I play the role of an elite military officer, who among his troops, gets hit by the most grenades because he has to fail in order for Jang-woo to rise in the ranks. There are many scenes where I fall and I think a lot of them will turn out well from seeing how rough my hands have gotten. 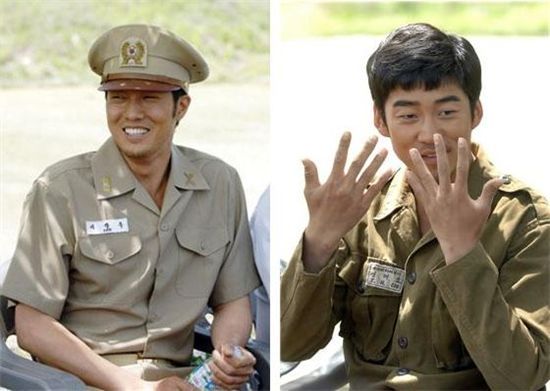 Korean actors So Ji-sub (left) and Yoon Kye-sang (right) at the press conference for "Road No. 1' [MBC]

10: It must have been dangerous.
Yoon: There were many dangerous scenes but I worked hard while in shoot because the director said it looked 'cool'. (laugh) I wasn't worried even a bit despite the scenes being difficult because I knew the director did a great job shooting each scene.

10: You may not have had as hard of a time as the two male actors in the physical sense but I bet as an actress, it isn't easy to let go of the visual aspect of how you're seen to the audience.
Kim Ha-neul (Kim): I have never felt burdened by that at all. I think the biggest concern as an actor is how to do well in expressing a character that I really like. What was most important was how I understood my character Soo-yeon and act it out. That doesn't mean that I don't think about how I look but the producer said that the drama would fail the harder I try to look pretty. (laugh)

10: What were your reasons in choosing this particularly difficult production?
Yoon: I read the whole script from part one to part 20 without stopping for ten hours straight when I first received it. I felt that if they made the drama exactly like the script, it would become a memorable production for the audience and it was really fun as well. I couldn't help taking it on because I liked the drama itself so much more than my character.
Kim: This was the first time I have received a script that is fun and moving even though I have shot over 20 movies and dramas in total. I don't think it's important that the role of my character Soo-yeon is small compared to my roles in the past. I took on the challenge of playing the role of Soo-yeon because I felt that she was someone with big presence. I had my doubts, wondering whether I would be able to pull off a character that felt like my mother and my home, as opposed to in the past when I felt I could play whatever role I decide to take on. That's why I had a hard time.
So: I think luck was on my side since I was able to star in this drama. People say I choose productions that are difficult but it's not fun to play the handsome guy wearing a suit. I like roles that allow me to get physical. Maybe I'll pick a difficult production for my next role again.

10: Since you have finished shooting over 80 percent of the drama, are there any memorable scenes or episodes that come to mind?
So: I remember every scene, not just one. I recommend the viewers to watch it from the beginning to end because it's hard to say exactly when to start watching.
Kim: I agree with So. The scenes containing my character are very strong, even if I may not have as big as a role compared to my past characters. Some scenes are usually edited out after they're shot but most of my scenes won't be cut. Not only are they scenes which have impact but they're also necessary for the flow of the story.
Yoon: Honestly, I can't remember a thing. When we shoot the war scenes, I just think about how to get about, as if I was in an actual war situation, thinking about how I should avoid the enemy and on focusing on Jang-woo when I see him. 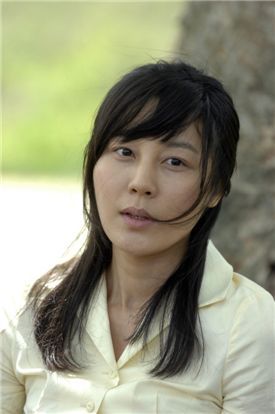 Korean actress Kim Ha-neul at the press conference for "Road No. 1" [MBC]

10: Kim Ha-neul, what are the strong scenes that you just mentioned?
Kim: I have never shot a melodrama as if it's an action scene. I would end up with bruises on my body after the scenes because that's how full of energy I was when shooting it.
So: We really did shoot the romantic scenes as if in war. I think you may get to see something you have never seen before. I myself was surprised while shooting them.
Kim: I wonder if the show will meet the censorship criteria. (laugh)

10: It must've not been easing being an actress who usually does not shoot revealing scenes. What made you do it?
Kim: First of all, I trusted the director and like I already said, the situation wasn't forced at all and it was a much needed scene for the drama. I don't think it's right to bare your skin if it makes me think 'Why do I have to?' but it's understandable in our drama.
So: When you watch the drama, it'll seem more beautiful than risque.

10: You would have to become close with your co-stars in order to play the role of someone who falls in love with both actors -- So with whom you modeled for fashion brand Storm and with Yoon you had filmed the movie "Lovers of 6 Years".
Kim: Yoon and I already been for quite a while since we had shot the movie together. We would joke around and make fun of each other on set. Sometimes he would provoke me. (laugh) I think that is why it felt comfortable while we were shooting. But this was the first I had seen So since 1997. We didn't really talk that much at the time because we were both introverted and it wasn't that long after we made our debuts.
So: I think we had only met about a total two to three times.
Kim: We had to have good chemistry quickly because in the drama, we are two people who are deeply in love with each other. Sp we worked really hard at it and were able to complete the shoots successfully.

10: Did you try to meet outside the set to become closer? For example, go to drink?
So: We never went drinking together. We had such a tight schedule, where we would come on set on Monday and go home on Saturday.
Kim: We became closer after shooting the love scenes.
So: I think we'll make many headlines today. (laugh)

"Kim Ha-neul says "first time receiving such a moving script" "
by HanCinema is licensed under a Creative Commons Attribution-Share Alike 3.0 Unported License.
Based on a work from this source