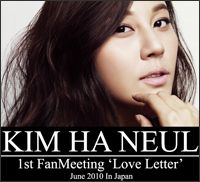 Korean movie star Kim Ha-neul is holding her first fan meeting in Japan, according to her agency J.One Plus Entertainment.

The star of hit film "My Girlfriend is an Agent" (2009) will appear next month at Ginza Yama Hall, Tokyo, for her the meeting titled "Love Letter".

"I am so looking forward to meeting my Japanese fans. I'm preparing hard to show the best of me", Kim was quoted as saying by her agency.

Kim has appeared in press conferences and events to promote her television dramas and films in Japan, but this is the first time for her to arrange a specific event for her Japanese fans.

At the fan meeting, Kim is planning to sing a couple of songs to show her gratitude and also release some never-before scenes from the television drama "On Air" (SBS), "My Girlfriend is an Agent" and her most recent TV project "Road No. 1" slated for airing this June.

The agency added that the venue also proved Kim's popularity in Japan, as it is hard for even top Japanese stars to rent the hall for shows and fan meetings.

Making her debut in 1996, Kim has appeared in numerous dramas and films and has proved her versatility as an actor throughout the years. She appears in "Road No. 1", which will air in June, with fellow hallyu stars So Ji.

"Kim Ha-neul to hold first fan meeting in Japan"
by HanCinema is licensed under a Creative Commons Attribution-Share Alike 3.0 Unported License.
Based on a work from this source