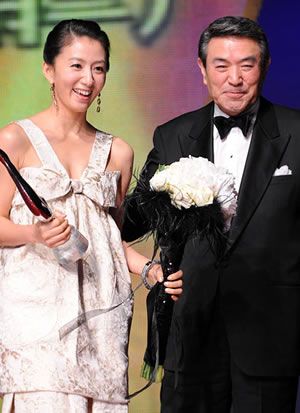 TV actress Kim Hee-ae was named as the best dresser of the year Wednesday in an event organized by Herald Dongah TV, a major cable television channel specializing in fashion and beauty.

Kim, one of the top-rated television actresses in Korea, won praise from the public for her excellent fashion choices in the hit TV drama "Naenamja-eui Yeoja" ("My Man's Woman). Demonstrating her exquisite fashion sense, the 40-year-old celebrity was dressed in white V-neck mini dress with a big gold-print ribbon on the front.

Meanwhile, the Fashion Icon Award went to actor Cha Seung-won and actress Son Ye-jin. Son was dressed in a gold satin dress with an eye-catching fur-print tote bag. Model-turned-actor Cha wore a modern version of the tuxedo, which highlighted his simple but sexy character.

The fashion and design awards also held a fashion show by the house of J. Roseroco and a mini concert by two talented K-pop divas: Park Jung-hyun and Yoonha.

"Kim Hee-ae named best dressed 2007"
by HanCinema is licensed under a Creative Commons Attribution-Share Alike 3.0 Unported License.
Based on a work from this source