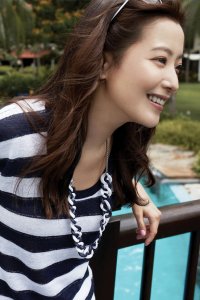 Actress Kim Hee-sun will be having a baby sometime in late January next year. Often cited Korea's most beautiful actress, Kim went to an OB/GYN yesterday to confirm her pregnancy. She is currently five weeks into her pregnancy and her due date is late January 2009. Kim and her husband are naturally elated, and her in-laws are also overjoyed to see their first grandchild.

According to Kim's closest associate, the actress found out about a week ago that she was expecting, after taking several at-home pregnancy tests. Kim's friend said that Kim wanted to have a baby ever since she got married and always dreamed of having at least three children. Kim herself is an only child, so she has always wanted a big family.

Kim has married businessman Park Ju-young, second son of Larksan Group Chairman Park Seong-gwan, in October 2007. She has stayed out of the limelight since she got married, and with the news of her pregnancy, her comeback is likely to be postponed until late next year after she gives birth to her baby.