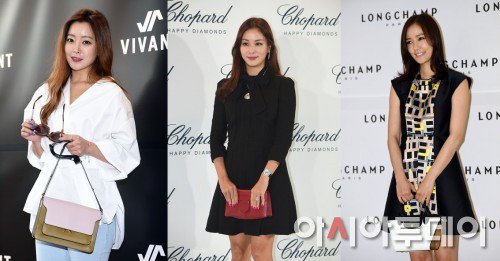 Kim Hee-sun, Ko So-young and Son Tae-young, the three most beautiful 'ajumma' actresses who were famous in the 90s to the millennium, are back.

Although they are married, they are still radiantly beautiful.

- Kim Hee-sun comes back with "Woman of Dignity"

Kim Hee-sun was in the 2015 MBC drama "Angry Mom" and this time she's back with "Woman of Dignity".

"Woman of Dignity" is about a Chungdamdong daughter-in-law who hits the ground as her father-in-law goes bankrupt and her husband betrays her. It's unsure where the drama will be broadcast but other casts include Kim Sun-ah, Lee Ki-woo, Jung Sang-hoon and more.

Kim Hee-sun takes on the role of Woo Ah-jin. She has outstanding sense of fashion and personality and calls on 'girl crushes' as she is that attractive.

Along with Kim Hee-sun's fanciness, we can see the explicit sides of the high class society.

Kim Hee-sun said, "Ah-jin is a very attractive character who shows both sides of life. Thanks to great directors and writers, I think this will be an outstanding drama".

It's been 10 years. Ko So-young is coming back with a new KBS 2TV drama called "The Perfect Wife". She was only seen in collections and ads but now she's actually doing some acting.

"The Perfect Wife" is a mystery comedy based on woman power through Sim Jae-bok (Ko So-young).

Ko So-young is an ajumma, a wife to Koo Jeong-hee (Yoon Sang-hyun) and the mother of two. Ko So-young is going to create a candid version of Sim Jae-bok.

Ko So-young claims she's relating to the character more and more as she reads the script.

Ko So-young says, "I relate to Sim Jae-bok and the situation she is in. We are alike in character as well and as a housewife, I can naturally blend in my experience to my character. I hope you look forward to it because I will".

- Son Tae-young comes back with "You're Too Much"

Son Tae-young is following her husband Kwon Sang-woo's footsteps and has started to become active. She's starring in the new MBC drama "You're Too Much".

"You're Too Much" is a life story about a star singer and his singer mother getting involved with love, hatred and sympathy. Son Tae-young takes on the role of Hong Yoon-hee, the grand-daughter of the chairman of a university. She was raised with class but is hurt in the guts by Yoo Ji-na (Uhm Jung-hwa) as she steals her fiancé away.

Son Tae-young was last in the drama "Lee Soon-sin is the Best" 4 years ago. She's back with a fermented determination.

"Kim Hee-sun, Ko So-young and Son Tae-young are back"
by HanCinema is licensed under a Creative Commons Attribution-Share Alike 3.0 Unported License.
Based on a work from this source