Kim Hee-won Comes Out of Obscurity with Villainous Characters 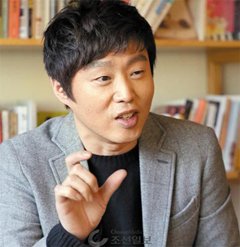 Actor Kim Hee-won's career seems to be made up of villainous roles. He is gaining fame as he appears as a bad guy in hit soap "Incomplete Life" on cable channel tvN, which is drawing an explosive response among salary workers.

Based on the web comic book series, the soap vividly portrays the life of office workers who suffer from severe workplace stress and hardship.

"When I first read the script, I couldn't totally relate to the character I had to play, so I tried to tone it down a little bit", he said. "But I learned that real life might be even more cruel in a competitive society".

Kim, in his early 40s, appeared in many films and dramas during his acting career, but he was able to get out of obscurity mostly due to some bad-guy roles.

"I played various roles, but people notice me when I played bad guy roles", he said.
Kim gained some recognition in the hit film "The Man From Nowhere" in 2010. He also appears as a villain in recent film "Cart".

But if one looks beyond the characters, Kim's good-hearted nature is hard to miss. He had to skip the all-important college entrance exam some 23 years ago in order to help a total stranger he bumped into on his way to an exam site.

"I wouldn't have gone to college anyway because I was not interested in studying very much", he recalled.

Kim has high hopes for moving beyond villainous characters.

"Now I hope to take on some good-guy roles", he said. "I'm still single, so I feel most relaxed when I spend time talking with friends. In fact, I'm not that mean or much of a bad guy at all".