Kim Heechul, Off To The Military 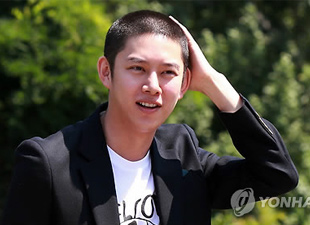 Kim Heechul of Super Junior gave a greeting of gratitude to his fans before starting up his mandatory military duties.

Right before entering into the training facility on September 1st at 1 PM, Kim showed off his newly shaven head after saying, "I was just going to go without saying bye, but this haircut came out better than I thought it would!" With his hat taken off, he took a deep bow and said, "I'll come back an adult. Thank you so much for coming all this way to see me off".

True to his witty form, Kim then put on his hate to the side while posing asking fans to photoshop the pictures they take before posting them up.

The popular Super Junior member had many fans screaming out to him with tears streaming "Goodbye!", "We'll wait for you!", etc.

Kim will receive four weeks of military training at the Nonsan Training Center before starting his 23 months of service.

"Kim Heechul, Off To The Military"
by HanCinema is licensed under a Creative Commons Attribution-Share Alike 3.0 Unported License.
Based on a work from this source