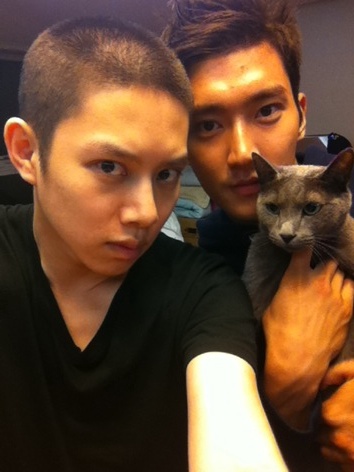 He posted a picture on his Twitter on the 31st of August.

In the picture he is looking at the camera with Choi Si-won with a cat in his arms. His eyes are strong-looking.

Those who have seen this picture say, "Be healthy", "Your hair looks good", "You're really handsome" and more.

Meanwhile, Kim Heechul will be admitted to the Nonsan training base for 4 weeks of training then will stand post as a public soldier.

"Kim Heechul with Choi Si-won after shaving"
by HanCinema is licensed under a Creative Commons Attribution-Share Alike 3.0 Unported License.
Based on a work from this source