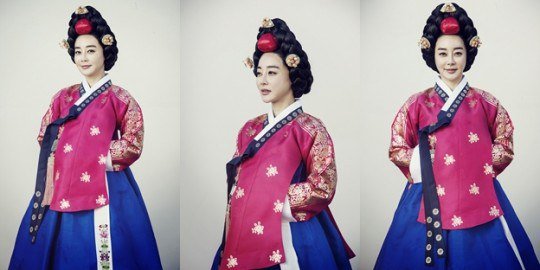 Kim Hye-eun stars in the new KBS 1TV drama "Jing Bi-rok" as Royal Kim and she said, "The pressure on my shoulders is as heavy as this wig".

Kim Hye-eun said, "This isn't my first historical but it's my first epic drama and I've always wanted to do it. It's a good chance for me and I studied a lot of history because of it. The writer even said I know more than she does. Everyone here is doing their best. This is the first time wearing a traditional wig; it's putting pressure on my neck so I'm doing yoga". She is the only woman on the set and she was too on the set of "Nameless Gangster" so she knows the drill. "I need to prepare a lot of snacks" she says.

When asked about her concerns about acting and the direction she sees herself going she said, "Kim was considerate of her father Seonjo's concerns and was adored for her wisdom. I try to make her look outstanding and I hope the viewers see her that way, too".

"Jing Bi-rok" is about Ryu Seung-ryong who suffers from the Japanese invasion for 7 years and decides that the country must be prepared at all times for any foreign attacks even in the future. The story is based on his very own novel.

The drama is produced by Kim Sang-hwi and written by Jeong Hyung-soo.

"Kim Hye-eun in "Jing Bi-rok" wears a heavy head wig"
by HanCinema is licensed under a Creative Commons Attribution-Share Alike 3.0 Unported License.
Based on a work from this source