Kim Hye-soo Once Doubted Her Talents, But No More 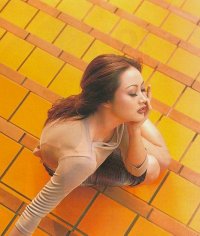 "I couldn't help but doubt my talent", declares Kim Hye-soo, but despite this modest, self-effacing remark, the actress looks more confident and speaks with more self-assurance than ever before.

In the lustful comedy movie "A Good Day to Have an Affair", set for release on Feb. 8, Kim plays a 30-something wife who has affair with a university student 10 years her junior. Her character is cheerful and comic and Kim delivers the role effortlessly and without exaggerated clowning. It's quite a shift from her past performances. What's the secret behind the sudden change? Has she been hiding her true talents throughout the 21 years of her career?

People started to talk about the "rediscovery" of Kim Hye-soo after her success in "Tazza: The High Rollers" in 2006. But the real turning point for Kim was 2000 when she returned to the silver screen after a slump. "Before that, I was satisfied with being stimulated by the creative energy unleashed by other talented people, like my colleagues and directors", she said. That, she admitted, was a rather roundabout way of justifying a deep and gripping doubt about her acting abilities.

At the time, Kim Hye-soo was more like a star than an actress. "I just followed whatever trends were going on in the movies and television", she said. "At the time I had only three choices: a romantic comedy, a general comedy and an adult movie that would be hard to be released in theaters", she said. "That's not to denigrate the genres, I'm just pointing out that my potential roles were very limited".

Kim describes her success since 2000 as a mutual effort between herself, as she began to challenge herself, and her directors, who coaxed a new Kim Hye-soo to the screen. Finally rising above her doubts about her talents, Kim appeared in "Kick the Moon" in 2001, and after that in "YMCA Baseball Team", "Three, Monster", "Faceless Beauty" and "Red Shoes".

"Because of the success of 'Tazza: The High Rollers', people may associate me just with that movie, but I was working very hard way before that", she said.

Kim Hye-soo debuted at the age of 15, her youthful sensuality stimulating sexual fantasies in teenage boys and men across the country. And while she's confident and eloquent when talking about her self-doubts, she hesitated when asked about her sexual appeal. But she quickly regained her composure and her smile returned. "An actress is by nature subject to sexual fantasies, and in a way responsible for meeting those desires", she said. "But even so, I still feel uncomfortable sometimes when the media chooses to focus on my body or how I dress".

While Kim once lamented that the best directors weren't interested in her, those days are history. With one of the busiest schedules in the movie industry, Kim will appear later this month as an author of Chinese martial arts fiction in "The Family You Hate", directed by Chung Yoon-chul. Currently she is shooting "11th Mother" with director by Kim Jin-seong in which she plays a mothering role to a special child just as her life is about to end.

While talking about her character in "Eleventh Mom", she announced, out of the blue: "If I have a baby, I want to have it grow up in the country". When asked why, she cited the talented team behind "Tazza: The High Rollers", Director Choi Dong-hoon and actors Baek Yoon-sik, Yoo Hae-jin and Cho Seung-woo all grew up in rural areas, she said, and she suspects that their country experiences played an important part in their creativity. Growing up in Seoul and becoming an actress at 15 left Kim no chance for a similar lifestyle. "However hard I try, there are some things I'll never have, and that youthful experience with mother nature is one of them", she said.

While describing the talents of her colleagues on "Tazza: The High Rollers", Kim became so excited that she knocked over a nearby stand. Suddenly, this mature actress who we have watched grow up for the last 21 years looked just like that teenager who so many fell in love with.