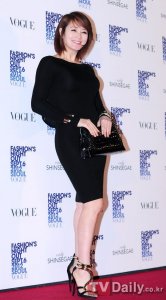 Strangely, Kim Hye-soo's beautiful face and curvaceous figure have not delivered box-office success for the actress. Her bold - and revealing - role in "Faceless Beauty" did not impress moviegoers in 2004. Nor did a tour de force performance in 2005's horror flick "Red Shoes".

However, a much-awaited turning point came in 2006 when Kim played a voluptuous character in director Choi Dong-hoon's "Tazza: The High Rollers" ("Tazza: The High Rollers"), a highly successful gambling flick. Both critics and mainstream viewers praised Kim's dauntless yet sensual portrayal of a gambling hostess, and her silver screen value soared.

As if her sexy image-making on the silver screen was not enough, Kim is doing it all again with a similarly sensuous role in "A Good Day to Have an Affai", a black comedy depicting two homemakers embroiled in extramarital affairs. Jang Moon-il, who made the lighthearted comedy "The Happy Funeral Director" in 2000, directs the film.

In "A Good Day to Have an Affair", to be released on Feb. 8, Kim plays E-seul, a freewheeling and adventure-seeking married woman who is having an affair with a college boy played by Lee Min-ki. E-seul does not hesitate in pursuing a relationship with the young man, though the age gap is more than 10 years. Rather she takes the lead in cultivating and deepening the affair with him.

Thanks to a recent flood of immoral relationships romanticized by mainstream filmmakers, Kim's role seems unlikely to provoke uproar from conservative viewers. But perhaps the opposite might be true; film producers seem to assume that a strong sexual presence offered by a famous actress such as Kim might boost ticket sales.

The stakes are high for iFilm which produces its eighth film "A Good Day to Have an Affair". The production house is a unit of Sidus HQ, an entertainment company which has an envious lineup of top-rated Korean Wave stars including Kim Hye-soo, Jeon Do-yeon, Jung Woo-sung and Jun Ji-hyun.

iFilm, jointly led by Jeong Hoon-tak and Oh Ki-min, is yet to produce a major hit. Its key films include "Faceless Beauty", "Windstruck", "S Diary" and "Sad Movie", but none of them recorded respectable box-office results.

For Kim and iFilm, "Faceless Beauty" is a bad memory that they want to forget. They vigorously marketed Kim's partial nudity as a key selling point, but no one seemed interested in seeing the 37-year-old's body. Ticket sales fell short of expectations, drawing just 500,000 viewers.

No movie expert questions Kim's renewed box-office power following the sizzling success of "Tazza: The High Rollers". Kim is regarded as a fashion icon and sex symbol across the country.

The sultry actresses confidence was palpable at the showcase of the new movie held on Thursday. "The movie is dealing with the essential loneliness of human beings, and unlike its light-hearted tone, the theme is serious", Kim told reporters.

Asked why she chose a film involving nudity hot on the heels of her sexy role in Tazza ("Tazza: The High Rollers"), Kim said she did not have any intention to star in a film involving nudity. "This film is very different from Tazza in terms of the character I play, and I didn't choose this role because of the nudity".

iFilm is currently trying to secure a film rating for 15-year-olds or older, but due to the adult content involving extramarital affairs between older women and younger men, it is widely expected to end up with an 18-and-over rating.

Kim, who made her big-screen debut with "Kkambo" in 1986, stands at 170 centimeters and rarely hesitates to show off her naturally "bootylicious" figure. Thanks to bold posturing, photographers frantically rush to capture her image whenever she appears in a revealing dress at film award ceremonies and other public events.

The actress is also defying the ageist film market convention. Normally, actresses who have passed a certain age no longer land offers from star directors, but Kim - like her character E-seul in "A Good Day to Have an Affair" - seems to be breaking all the rules.

"Kim Hye-soo's sex appeal beams in comedy film"
by HanCinema is licensed under a Creative Commons Attribution-Share Alike 3.0 Unported License.
Based on a work from this source