Kim Hyun-joong, Back On the Small Screen? 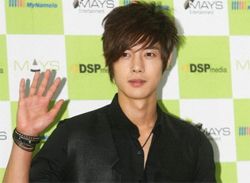 There has been much speculation over what Kim Hyun-joong, singer and leader of group SS501, will be doing when his contract with DSP Entertainment comes to an end this upcoming June 8th. Though related parties have kept tight-lipped over the matter, recent reports on the May 12th are hinting at a possible future project for Kim: a not-so-small-project on the small screen.

The production company behind what's currently one of the most anticipated dramas, "ATHENA" (a spinoff from the hit drama "IRIS"), has spoken out indicating their interest in Kim Hyun-joong as a cast member on the show. They said that although there's no current openings fitting for Kim, they'd be willing to create a new character -- such as an national intelligence agent -- just to have him on board. Kim Hyun-joong has also reportedly shown interest, especially because he wants to tackle a more manly, action role different from that his gentle, pretty boy character from the drama "Boys over Flowers".?

Well, if both parties are interested, what's the problem? The problem is Kim's ending contract with DSP Entertainment. His ability to join the cast for "ATHENA" would depend on his final decision on whether he stays with DSP, renewing his contract, or whether he leaves for another entertainment company. If matters aren't sorted out soon, Kim may miss this particular opportunity being that the drama starts shooting mid-June to start airing at the end of this year. Taewon Entertainment even said that they may be forced to opt for another similar idol group member to take Kim's place.

"Kim Hyun-joong, Back On the Small Screen?"
by HanCinema is licensed under a Creative Commons Attribution-Share Alike 3.0 Unported License.
Based on a work from this source