Kim Hyun-joong comes back with a new drama 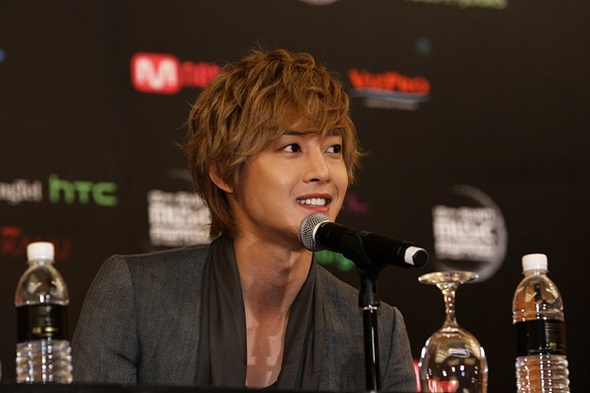 Kim Hyun-joong hinted that he is going to be coming back with a drama.

A welcome meeting for the artists attending the 2011 Mnet Asian Music Awards (2011 MAMA) at Singapore Indoor Stadium took place at 10AM on the November 29th. Numbers of reporters and members of press showed up to hear what the artists had to say.

Kim Hyun-joong talked about his life as a leading Hallyu star and revealed his future plans. Many reporters from Hong Kong, Thailand, Vietnam and China asked him about performances and concerts overseas. He replied, "I have been cast for a drama recently, so I postponed my World Tour Concert to the end of next year".

He said, "You should see me act again by April. I haven't made an official announcement but even those of you overseas will be able to see me next year. I am also planning a music album".

If it's true, then according to him, he is coming back with a new drama one year and six months after SBS's "Naughty Kiss" last September. Nothing else is known about this drama. His management hasn't said anything.

Meanwhile, "2011 MAMA" drew open its curtains inside Singapore Indoor Stadium on the November 29th. Main K-pop leaders such as 2NE1 and Girls' Generation will be there and internationally famous musicians like the Black Eyed Peas and many more have had fans anticipating this event for a long time.

"Kim Hyun-joong comes back with a new drama"
by HanCinema is licensed under a Creative Commons Attribution-Share Alike 3.0 Unported License.
Based on a work from this source