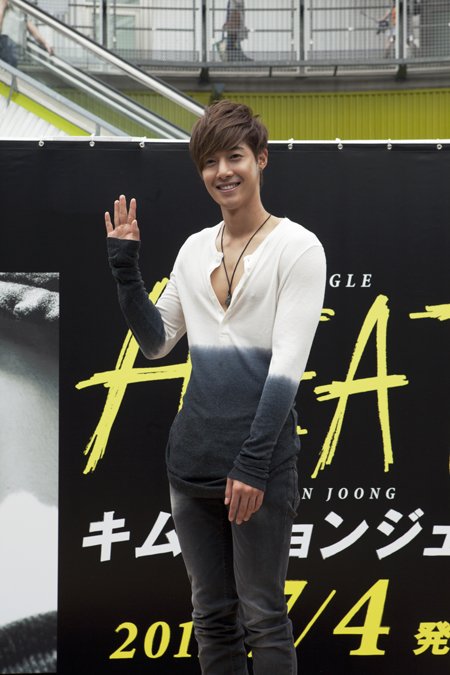 Korean singer and actor Kim Hyun-joong meets and greets fans at an event in Tokyo on Tuesday to celebrate the release of his second single "Heat".

His agency, Keyeast, said that the new single, also featuring the tracks "Let's Party", ranked first in daily sales for Japan's Tower Records as of Tuesday due to pre-orders. With this song, the 26-year-old artist has tried to promote a more masculine image.

Kim held an event in Tokyo Tuesday and met some 5,000 fans ahead of the release of the second Japanese single. It attracted media attention even before the official release as the title track was composed and produced by famous Japanese rock duo B'z.

Kim made his debut in 2005 with first single "SS501". He is also well known for his role in Korean reality television show "We've Got Married" in 2008 and drama "Boys over Flowers" in 2009. He has won numerous awards including the Male Popularity Award at the 45th Baeksang Arts Awards in 2009 and Best Male Solo Artist at the 13th Mnet Asian Music Awards in 2011. Following the release of the single, Kim is to appear on Nippon TV to promote the new songs on July 6 and will also give a free live performance "Kim Hyun-joong 'Heat' 2012 in Japan" at the Saitama Super Arena in Japan on July 14 and 15.

"Kim Hyun-joong releases single 'Heat' in Japan"
by HanCinema is licensed under a Creative Commons Attribution-Share Alike 3.0 Unported License.
Based on a work from this source