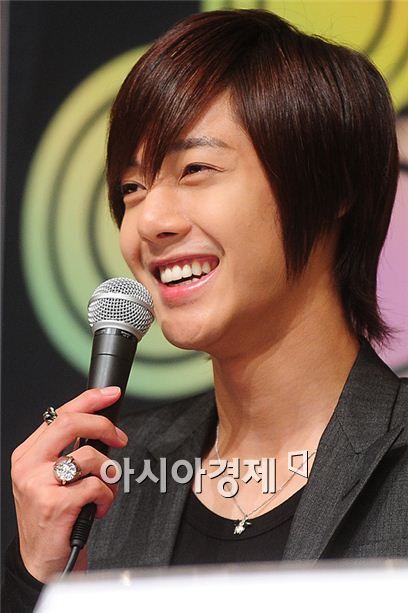 Singer and actor Kim Hyun-joong has said his boy band SS501 has not disbanded, playing down rumor that its five members will go separate ways since their contract with their former agency has ended and some have signed with new management.

The 24-year-old heartthrob made the remark on Thursday at a press conference for upcoming MBC drama "Naughty Kiss", the Korean small screen adaptation of Japanese comic series "Itazura na Kiss", where he will play the role of a Mr. Perfect who ends up falling in love with a girl always getting into trouble, taken on by actress Jung So-min.

Emphasizing that "nothing has been decided" regarding a possible breakup of the band, Kim explained, "People say we have disbanded but none of that talk has come from our mouths. What are you going to do if we then come out with a new album? Please just wait and see".

Kim is the first member from his group to sign with a new agency after SS501's contract with DSP Media expired in early June. He joined KEYEAST later that month, one of South Korea's largest entertainment houses of which top actor Bae Yong-joon is a major shareholder.

And while members Heo Young-saeng and Kim Kyu-jong have yet to join new agencies, Kim Hyung-jun is currently looking into signing with Kang Ji-hwan's talent firm S Plus Entertainment.

"I moved to KEYEAST because I wanted to gain on my experience as an actor. But I was happy because the agency said it would manage my career not only as an actor but as a singer as well", Kim Hyun-joong said, commenting on his move for the first time in public.

He then added, "It has not been set as of yet but it's true that I'm preparing for my singing career as well. I don't know if I'll go solo or be part of a group but as of now, I'm preparing for an album with a solo career in mind".

Kim also said he had originally planned to take a break after moving to KEYEAST but took on "Naughty Kiss" after being offered his role by the show's director Hwang In-roi of "Princess Hours" (MBC, 2006) and "Iljimae Returns - Moon River" (MBC, 2009) fame.

"Itazura na Kiss", a popular manga by Karou Tada, has sold over 27 million copies in Japan and was turned into an anime series in the country in 2008 by director Osamu Yamazaki.

It was also turned into a TV series in Taiwan where it was recognized as the No. 1 show in the country and was shown in 13 countries throughout Asia.

"Naughty Kiss" will go on air in Korea starting September 1.