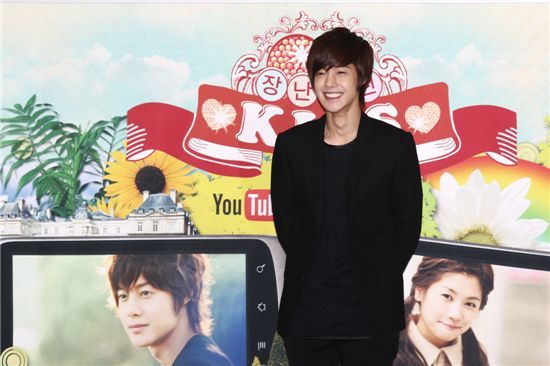 Kim Hyun-joong poses during a photocall of a press conference for the YouTube version of TV series "Naughty Kiss" held at the Megabox theater in COEX of Seoul, South Korea on November 1, 2010. [Group 8]

Boy band SS501 member and actor Kim Hyun-joong has said he will show deeper affection toward his co-star Jung So-min in the YouTube version of his latest TV series "Naughty Kiss".

"There are no regulations or restrictions to what is broadcast through YouTube so we'll be able to express our affection to each other in a deeper way. Hence, you'll get to see a more natural-looking married couple", Kim said with a smile of the newly produced online version of the drama which tells of the twos characters married life.

The TV show's producer Group 8 and YouTube owner Google came together to create a YouTube version which was newly shot in seven ten-minute long episodes with the same cast and director from the TV show but with new or additional details.

Song Byung-joon, CEO of Group 8, explained that he focused on making each episode fun and distinctive since a TV drama has continuity to its story but it would not be the case for the web-based version.

Showing every Tuesdays, Wednesdays, and Thursdays, the online version of "Naughty Kiss" will premiere at 7 p.m. today and run till November 16. Two episodes containing behind the scenes clips will show on November 17 and 18.

"Naughty Kiss" is based on Japanese comic "Itazura na Kiss" which sold over 27 million copies in Japan and has been made into animation in Japan and a top-rated television drama in Taiwan.

The 16-part series was sold to 12 countries around the world ahead of going on air and so far has been purchased in a total 11 nations in Asia.