Kim Hyun-joong, will he become the next Lee Byung-hun in "City Conquest"? 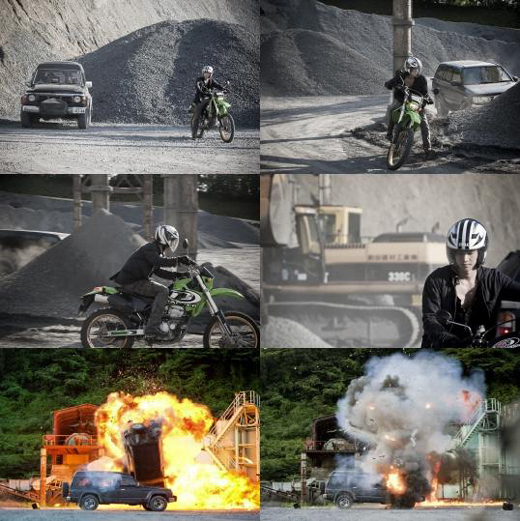 Kim Hyun-joong is currently filming the drama "City Conquest" in Japan. The fancy action, intense bike chase and car blow-up's are done by the special effects team from the drama "IRIS". These scenes have been planned and calculated days before the actual taking to prevent accidents.

Kim Hyun-joong jumped onto a bike the moment he saw one on the set and drove it around without difficulty.

However, he tensed up when he was about to go into filming and the scene started with a monstrous roar from the bike.

The expert on special effects exploded two real cars. The sudden explosion caused debris from the fire to spread out everywhere and the situation could've been dangerous.

Apparently, "City Conquest" is being dramatized so the security is tight. The cars and the bikes are just the beginning.

"City Conquest" is produced by Yang Yoon-ho from "IRIS" and is being expected as the second "IRIS". The background is going to take place in America, China, Singapore, Myanmar, the Switzerland and more.

"Kim Hyun-joong, will he become the next Lee Byung-hun in "City Conquest"?"
by HanCinema is licensed under a Creative Commons Attribution-Share Alike 3.0 Unported License.
Based on a work from this source