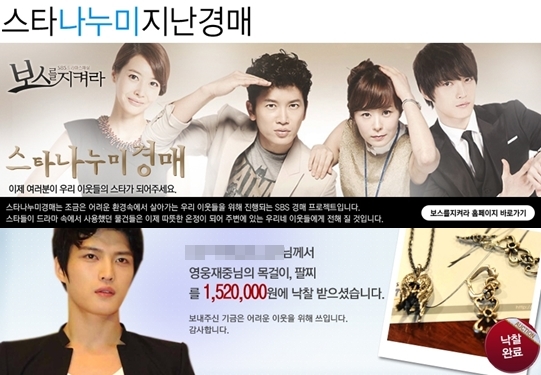 The fact that accessories of JYJ's Kim Jae-joong have been auctioned off at a high price has been become known and is a hot topic.

Recently at SBS "Star Give Outs", the belongings of stars from the drama "Protect the Boss" were bid on.

Ji Sung and Wang Ji-hye sold off sunglasses, and Choi Kang-hee a finger puppet and headphones. Kim Jae-joong gave out a necklace and bracelets, which broke through more than a million won in an instant.

His necklace and bracelets are known to have been auctioned off at 1.52 million won. This is the highest bid anyone has ever made and is double the amount of "49 Days" Jo Hyun-jae's shirt (720 thousand won) which comes in second place now.

Meanwhile, at "Star Give Outs" the belongings of actors and actresses from the drama "Live in Style", "The Musical" and "Deep-rooted Tree" have been put up. The total amount of donations made from this event is up to 20,189,600 won and all the profits will be revealed on the homepages of Community Chest of Korea homepage as well as SBS Hope TV.

"Kim Jae-joong's accessories auctioned at 1.52 million won"
by HanCinema is licensed under a Creative Commons Attribution-Share Alike 3.0 Unported License.
Based on a work from this source