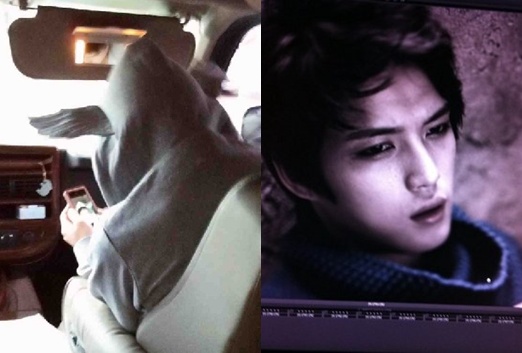 JYJ's Kim Jae-joong revealed a picture that was taken of him.

He posted this picture with the explanation, "This was taken behind me without me knowing it while I was trying to take pictures of myself".

The picture shows Kim Jae-joong's back while he's taking pictures of himself on his cell-phone. Those who have seen this picture say they recognize Kim Jae-joong just by looking at the the car's mirror and the slight image of him on the cell phone.

Some say "Where do I get one of those? I'm going to create a couple-look", "Just looking at his back makes me swoon" and more about his winged hoody.

Meanwhile, Hero is currently in the SBS drama "Protect the Boss" as HQ director Cha Moo-won and is looking forward to the release of JYJ's first Korean album, "In Heaven".

"Kim Jae-joong, stolen shot 'engrossed in taking pictures of himself, wearing a winged hoody'"
by HanCinema is licensed under a Creative Commons Attribution-Share Alike 3.0 Unported License.
Based on a work from this source