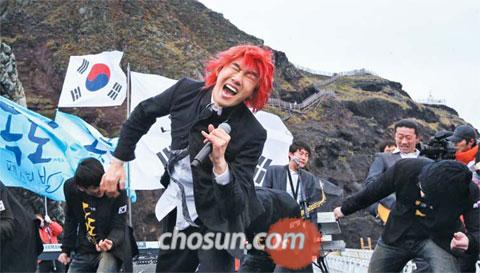 Kim said he has been planning the concert to assert Korea's sovereignty over the islets for two years. He attempted to land on Dokdo on Monday, but high waves prevented him.

Performing on a makeshift stage set up at the wharf, Kim was cheered by about 300 supporters who accompanied him all the way to the islets, waving the taegeukgi or Korean national flag. The supporters were joined by members of a group of self-appointed "cyber diplomats", the Voluntary Agency Network of Korea or VANK, college student volunteers, and about 30 soldiers stationed on the islets.

It was the first concert ever on Dokdo. "I hear that passenger ships can dock at Dokdo only about 30 days a year. With heaven's help, we were able to land on Dokdo on Independence Movement Day", Kim said, and pledged to turn the event into an international festival.

Seo Kyoung-duk, a PR expert who had planned the concert with Kim, said, "We organized the event because we felt it was a pity that interest in Dokdo would surge but then ebb away again very quickly. Our biggest enemy is probably our own indifference, not Japan", which claims dominion over the islets.

He said the two will expand the scale of the event with a backdrop of the East Coast and Dokdo from next year.