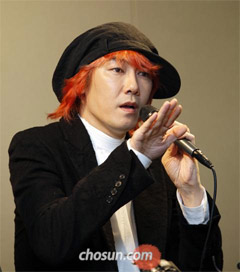 Singer Kim Jang-hoon is determined to take out ads in newspapers around the world to assert Korea's sovereignty over the Dokdo islets. Kim (44) made the announcement on Wednesday after the Japanese Education Ministry approved a spate of junior high school textbooks that state Japan's claim to the islets.

"I plan to run ads in major newspapers around the world publicizing the Korea Cup Yachting Tournament, and they will contain pictures of Dokdo", Kim told reporters. He wants to raise awareness through the regatta of the fact that Dokdo belongs to Korea.

Kim also plans a concert out on the East Sea on Aug. 15 Liberation Day. The Korea Cup, whose organizing committee he belongs to, is an international regatta where participants start out from Pohang and circle around Dokdo to return to the southeastern port city.

"Dokdo has always been our sovereign territory, so it is unnecessary to rebut Japan's territorial claim", Kim said. "But this fresh controversy about the new junior high school textbooks has made it necessary to step up our publicity efforts".

The singer said he has received threatening mail from right-wing Japanese groups for his work spreading awareness of Korea's ownership of Dokdo. He claimed Tokyo stopped an ad that was put up in New York's Times Square at his expense and that another ad he and a fellow activist ran in the New York Times led to a protest from the Japanese government.

However, he said while Korea's ownership of the islets is a "fact", helping out Japanese earthquake victims is a matter of "humanity" and urged Koreans not to let the Dokdo issue hinder their donations for the victims.