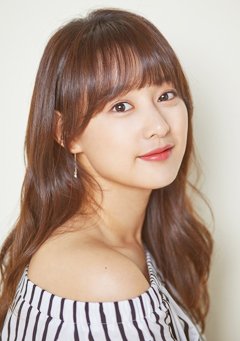 Actress Kim Ji-won has solidified her star status and become one of the most sought-after of the younger crop of actresses after appearing in the popular TV series "Fight My Way", which ended early this month.

Kim's performance in the series showed she is not just a pretty face. Despite adopting a shabby look to portray an ordinary young woman coping with many challenges as she pursues her dreams, the actress' charm shone through.

"As an actress, if you're not working on a project, it's like being unemployed. I've failed many auditions, and I've found life difficult at times, as have many of my friends. I wanted to reflect these feelings in the series", Kim said. "When you fail at something, it's important to pick yourself up and start over. That's what I've learned during my acting career".

After gaining attention in the sitcom "High Kick 3, The Short Legs Counterattack" in 2011, Kim appeared in two megahit TV series, "The Heirs" in 2013 and "Descendants of the Sun" in 2016.

Kim, whose childhood dream was to be a kindergarten teacher, got her start in acting when she received a life-changing offer to appear in a TV series. "I always try my best, whatever I'm doing. I enjoy acting and am embracing the challenge", Kim said.

Her next project will be the historical film "Detective K: Secret of the Living Dead". As always, she is treating the project -- her first such role, which will also involve some action scenes -- as a welcome challenge. "All I can do is give it my best shot", she said.

"Kim Ji-won Looks Forward to New Challenge in Upcoming Project"
by HanCinema is licensed under a Creative Commons Attribution-Share Alike 3.0 Unported License.
Based on a work from this source