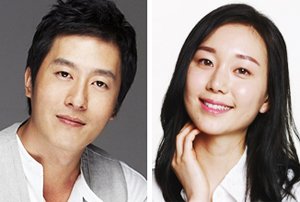 Kim (47) and Lee (27) first met while working for Hong Sang-soo's latest film, "Yourself and Yours".

They were getting closer while shooting the film together as the lead actors. Then they kept seeing each other as the film was invited to the San Sebastian International Film Festival in September, and just began dating.

Debuted in 1998, Kim gained popularity with his appearances in a number of dramas and movies. Lee, who is 17 years younger than Kim, is a starlet who just made her debut in 2014.

"Kim Joo-hyuk Dating Starlet"
by HanCinema is licensed under a Creative Commons Attribution-Share Alike 3.0 Unported License.
Based on a work from this source