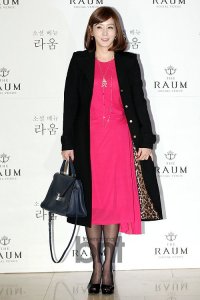 Kim Jung-eun used to be one of the best actresses in romantic comedies. From "Marrying the Mafia", which drew 5.2 million spectators in 2002, to TV series "Lovers in Paris", which hit peak viewers' rating of 57.4 percent in 2004, Kim played the role of cute, adorable girls to perfection.

But just three or four years ago her image began to change. Her new film "Le Grand Chef - Kimchi War" is part of that development. It is her first outing on the big screen in two years since "Forever the Moment".

"Le Grand Chef - Kimchi War" is about world class chefs fiercely competing to find the true taste of kimchi to gain control of a restaurant. Kim plays one of them, a woman who puts on a cold-hearted mask while trying to hide her broken heart.

Kim was given intensive cookery training for the part. "I started with little details like how to hold knives and how to prepare ingredients. I cut five radishes a day in order to get comfortable with knife", she recalls.

Kim experienced personal heartbreak when her widely publicized open relationship with a fellow actor broke up. These days, Kim is not bothered about marriage, and instead enjoys cooking and ballet. "Since last year, I've been studying ballet. It's one of the most popular hobbies among actresses these days. I haven't been able to do it for a while because of shooting and promoting the film, but I'll start it again soon", she says. "In terms of work, you reap what you sow, but I think finding a boyfriend is hard work. Meeting a good person seems to be a big chore for me. After shooting this film, I have just one more wish. I'd hoped to meet someone who could cook, but now I want to find someone who loves eating what I cook".