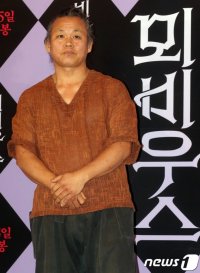 Interviewer: Could you explain further why you made such an extreme statement at last year's premiere of "Time"?

Kim Ki-duk: "The Host" is a great movie worthy of a 10 million-strong audience. However, the 13 movies that I have made over last ten years have been awarded about 30 prizes in international film festivals and exported to more than 100 countries, and I believe that I have contributed greatly to promoting the image of Korean culture throughout the world. What I said in the preview, in this sense, was my desperate attempt to raise an audience of at least 200,000 people, a fiftieth of that of the "The Host", to watch the movie. This was my dream. However, I no longer hold such preposterous expectations and would be satisfied if anywhere between 1,000 and 10,000 people come to see the movie.

Interviewer: You said, "My movies are trash". Wasn't this an insult to your fans?

Kim: I guess it did hurt those who truly love my films. If those who do not catch the real heart of my films have changed their minds, this is something that I can do nothing to change.

Interviewer: In announcing that you want to release your new film in Korea, you said, "I cherish my 30,000-strong devout audience rather than a casual audience of 9.97 million".

Kim: To me, a movie is a means of communication. In making a movie, I am, in fact, writing a letter, and the true message can only reach those who read this letter. I don't want to force people to see my movie.

Interviewer: Why do you think your films are more successful in overseas markets? (The top selling Korean movies in the U.S. and Europe are Kim's, and books about Kim have been published in English, German, French, and Russian.)

Kim: I don't know. I just made movies based on my ideas. My movies are about the irony in human suffering, sadness, and compassion. Maybe it is because they find something common in my reflections on life.

Interviewer: Reporting on the production of your new movie "Breath", you talked about how to revitalize art-house films.

Kim: I think the problem can be solved with governmental support. The rest is up to directors. Even in making low-budget movies, they should make detailed plans to limit expenses. New directors can prove themselves by making a digital movie rather than a film, which requires an investment of at least 200 million won.

Interviewer: When will your new movie be released? Has it been sold to overseas markets yet? ("Breath" is a movie about a man, who was sentenced to death and attempted suicide, a woman who falls in love with the man, and her husband. Taiwanese actor Chang Chen stars alongside Park Ji-ah, and Ha Jung-woo in the movie.)

Kim: Probably in May. It was pre-sold to five countries, including Italy and Spain, and will be sold to more than 20 countries when it is open to the public at Cannes.

Interviewer: The production cost bubble is a big issue in the movie circle. How do you make movies with such low budgets?

Kim: I made this movie in ten shootings, using 22,000ja film, over 15 days. (Usually, 100,000ja film at 50 to 60 shootings is used for a long piece.) You can save time and money by using less film. I try to shoot necessary scenes by rewriting the scenario more than 20 times. I work on a scenario and do the hunting myself. It takes a month for preparations, 20 days for shooting, and another 20 days for finishing. In saying this, I am not boasting of making a movie faster and with less money. I just try to do my best with minimum costs.

Interviewer: Do you have anything to tell your fans?

Kim: My movies are not to entertain, but to make people feel. Those who have secret scars will experience stronger feelings. I think my movies give people the strength to overcome unhappiness rather than just making them happy. I hope that in watching my movies, audiences ask themselves, "Who am I?"