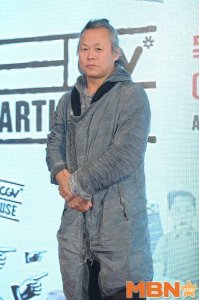 The art-house director Kim Ki-duk has apologized for an emotional outburst about the lackluster response his movies received at home and the record blockbuster The Host. "I offer my sincerest apologies to all those who were a part of the movie The Host," he said Monday. On Aug. 7, the director said he may "no longer export my films to Korea" and on Aug. 18, appearing on an MBC talk show, Kim did not mince words either on the way that The Host beat all box office records. Immediately after the program aired, the Internet was buzzing with criticism of the tortured artist.

An e-mail the director sent out to the press on Monday says when he referred to The Host as "the apex where the level of Korean movies meets the level of Korean audiences" and that this was both positive and negative, "it caused a public backlash". "And when I subsequently said that netizens who maligned me did so 'out of an inferiority complex demonstrating their level of understanding', I am very sorry. I am also very sorry about ridiculing viewers with my exaggerated comments while I spoke on the talk show". Kim said.

Kim apologized to the production staff and all those who worked on the film, and to the film's director Bong Joon-ho. "I hope that he can forgive my statements, which were unbecoming of a person who has been in the film world longer" than Bong. On his sarcastic vow to stop "exporting" his movies to his homeland, where they are not as well received as abroad, he said, "After winning several awards and seeing them screened overseas, I took the arrogant attitude of trying to educate Korean viewers, and I later regretted saying things that should not have been said. I hope that the public can forgive my brutal way of expressing the point that this is a market where it is difficult to release lower-budget films".

"The scolding I got from the public made me look back at my films, and I'm starting to think that I made miserable, self-regarding films and exaggerated the dark and ugly side of Korean culture in an overbearing manner and so made audiences uncomfortable", he said. "I became aware of the fact that I'm consciousness-disabled, and that makes it very difficult to live in Korea".