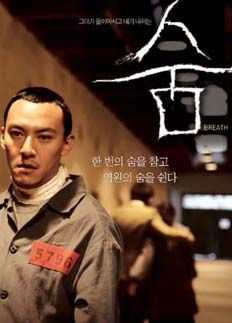 Film marketer CineClick Asia said Tuesday that it sold "Breath" at the Hong Kong Film Market held from March 20 until 23. The French distributor is devoted to introducing Asian movies to the country. Kim's latest work had also been sold to other 10 nations including Spain, Italia, Mexico, Greece and Belgium.

The marketer also sold "Seducing Mr. Perfect" starring Daniel Henney and Uhm Jung-hwa to Japan's Geneon Entertainment. It is expected to be released in the island country late this year. "Oasis" and "Friends" were sold to Britain, "The Birth of a Family" to Greece, and "The Host" to Hungary.