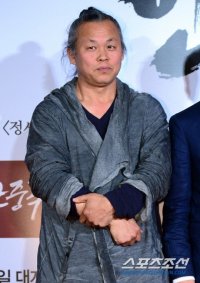 Director Kim Ki-duk has decided he will release his new project "Breath" to local audiences after-all. Last summer the director vowed not to release any more of his films domestically unless the Korean box-office took in 200 000 admissions for his plastic-surgery themed feature Time.

The director, who has won prestigious prizes at Venice and Berlin, receives more successful distribution and revenues for his films overseas than at home, where he is not so favorably received by the local press. His films often focus on problematic issues in Korean society.

While Time ultimately grossed 30,000 admissions, given its release on only eight screens, distributor Sponge House and director KIM consider it a success. Sponge will also release his 14th feature Breath, which wrapped up shooting January 20th, after a brisk 10 day shoot.

The film is a love story with minimal dialogue, involving a prisoner on death row, and a married woman who befriends him, after catching her husband cheating. Their relationship deepens as she gradually decorates his prison cell. It may draw comparison to last Fall's successful local drama Maundy Thursday ("Our Happy Time"), staring Lee Na-young. KIM's latest muted romance stars Taiwan actor Chen Chang, who played opposite ZANG Zi-yi as her outlaw suitor in Ang Lee's Crouching Tiger, Hidden Dragon, as well as starring in WONG Kar-wei and HOU Hsiou-hsien films. It is the first time KIM has worked with a non-Korean Asian star, and for Chang, it is his first experience with a Korean director. The film also stars Ha Jung-woo and Park Ji-ah.

Cineclick Asia will handle international sales, with a market premiere scheduled for Cannes in May, and pre-sales available at the upcoming Berlinale.

"KIM Ki-duk to Release Breath at Home"
by HanCinema is licensed under a Creative Commons Attribution-Share Alike 3.0 Unported License.
Based on a work from this source