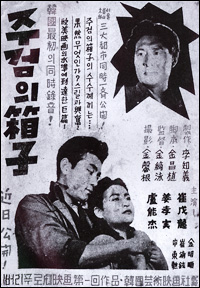 1955 'anti-communist' film retrieved from US archive

Kim Ki-young's directorial debut "The Boxes of Death" found its way back to the big screen in Seoul, Thursday, after being lost for more than a half-century.

The film was discovered in a U.S. archive two years ago, and its screening marks a historic moment in Korean cinema since most 1950s-'60s debut works by veteran filmmakers have yet to be found.

"The Boxes of Death" opened in local theaters in 1955 but went missing like many of the works from the period following the Korean War (1950-53).

In 2009, Kim Han-sang, a visiting fellow at the Harvard-Yenching Institute, discovered a copy of the film at the National Archives and Records Administration in Maryland, and the Korean Film Archive spent 24 million won to create a 35-millimeter replica of the print.

The version revealed here is unfortunately incomplete, a silent film with a misplaced audio track. The black-and-white film had made headlines at the time of its premiere because it was the first local project to shoot sound using a Mitchell camera, an expensive piece of Hollywood equipment that was rarely affordable to filmmakers here.

The piece also ignited controversy for its depiction of North Korean sympathizers. It was classified as an anti-communist propaganda film but some pointed out that it made a hero of its Stalinist protagonist. The Korea Times' sister paper Hankook Ilbo featured a series of articles criticizing this point it its July and August 1955 editions.

The story is about a communist spy Chi-sam (No Neung-geol), who disguises himself as a discharged South Korean soldier in order to infiltrate a local village. He finds lodging at Jeong-hi's (Gang Hyo-sil) house, after lying to the young woman's mother that her son, believed to have died in combat, is actually alive and has fled to the North after becoming a communist.

Instead of resorting to terrorist measures like his communist colleagues, Chi-sam tries to win people's hearts through power of persuasion and by tampering with regional political votes. (This suggests how the premise of such recent Korean War dramas as "In Love and the War " is not such a novelty). In the meantime, he takes advantage of his cover to prepare a big scheme at a secret communist hideout in the woods. But things go awry when a real discharged soldier returns to town with an urn containing a bomb.

The film is replete with the cineaste's signature realist expressionism, featuring uncut sequences of the beheading and plucking of a chicken. The progression from one scene to another is speedy yet pays heed to detail.

Ahead of the screening, the late Kim's eldest son Dong-won said it was a very special occasion for both his family and the history of Korean cinema. 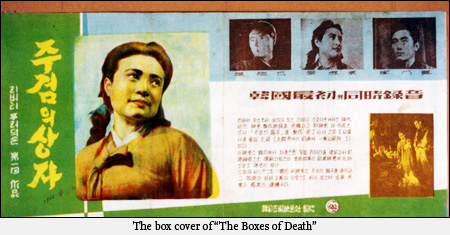 "It's a film that my father worked hard (to retrieve) by even contacting the United States Information Agency", he said. "Finding the film feels as though my father has come back to life".

"It's unfortunate that this is a half-way job, since the audio track is missing. But it is a significant feat considering that many master filmmakers' debut works remain lost", said film critic Kim Jong-won.

The Korean Film Archive is hosting a retrospective of Kim's early works until June 19. Fans will be able to watch not only "The Boxes of Death" but also films he made for the U.S. Information Agency, including "I Am a Truck" (1954) and "Diary of Three Sailors" (undated). The latter is in English.