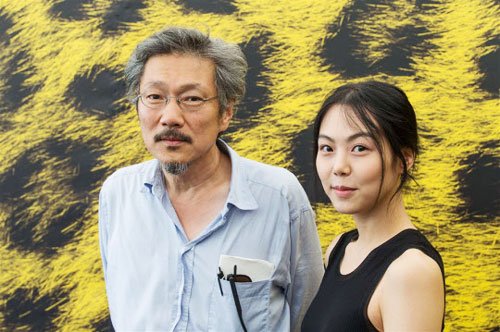 Actress Kim Min-hee is seeing director Hong Sang-soo, who is more than 20 years her senior and has left his wife and daughter for her, reports say.

Kim (34) and Hong (56) met while filming "Right Now, Wrong Then" last year and Hong left his family nine months ago.

They are both in the U.S. and have not commented on the reports.

Hong's directorial debut was the 1996 movie, "When the Pig Fell into the Well", and he has made 17 movies so far.

"In Another Country" competed at the Cannes Film Festival in 2012, while "Right Now, Wrong Then" won the grand prize at the Locarno International Film Festival last year.

He is also a professor of cinematography at Kunkuk University.

Kim, who debuted in a teen soap in 1999, starred in several movies, including the lead in Park Chan-wook's latest film "The Handmaiden".

Hong's wife has told a magazine that she will not divorce him and will wait for him to return.

"Kim Min-hee 'Dating Married Director Hong Sang-soo'"
by HanCinema is licensed under a Creative Commons Attribution-Share Alike 3.0 Unported License.
Based on a work from this source