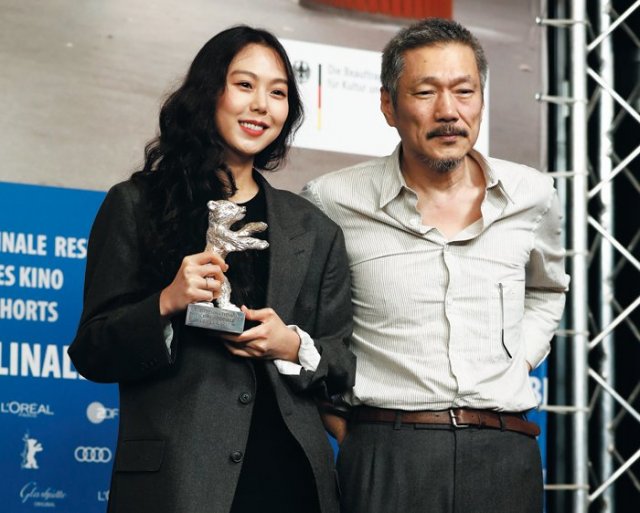 Kim Min-hee won the Silver Bear for best actress at the Berlin International Film Festival on Saturday for "On the Beach at Night Alone", which closely hews to her real-life May-to-September romance with its director Hong Sang-soo.

"I feel the film has been recognized for its artistic merit. I'm just happy for that", Kim said.

Berlin is one of the world's leading film festivals alongside Cannes and Venice.

Kim is the third Korean actress to win best actress award at the three festivals. Kang Soo-yeon won in Venice in 1987 for "The Surrogate Woman", directed by Im Kwon-taek, and Jeon Do-yeon at Cannes in 2007 for "Secret Sunshine" by Lee Chang-dong.

"I thank Hong Sang-soo, who made the beautiful film which will hopefully bring great emotions for those who see it and therefore I'm very proud of it. I honor you and I love you", Kim said during her acceptance speech.

Hong (55) made headlines here when he left his family for Kim, who is more than 20 years his junior. 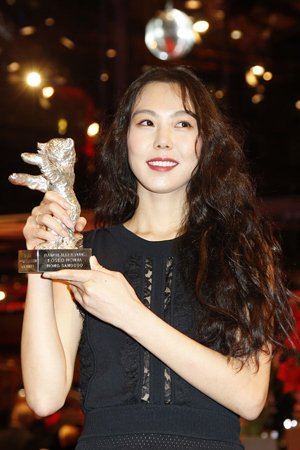 Actress Kim Min-hee poses with the Silver Bear for best actress at the Berlin International Film Festival in Germany on Sunday. /AP-Yonhap

The film too tells the story of an actress who falls in love with a married film director and goes away on her own to reflect on her life. But it was well received by audiences and critics in Berlin, where their personal story is barely known.

"The film had a press screening at 9 a.m. and an official screening at 4 p.m. on Thursday, and the main theater was packed. Although the film has subtitles, it's hard to follow long conversations in Korean, but the viewers' response was very good and I heard people laughing", said film critic Jeon Hye-jung.

Hong's films often have an autobiographical bent. In the film, the actress leaves for Germany to escape the scandal.

Hong cautioned critics against making too much of the resemblances. "Every director uses some of his own materials from his own life. You need a certain kind of intimate distance from the material you are using", Hong said. "Maybe by comparing it with the work of other directors it might seem autobiographical, but I have no intention for it to be".

Kim appeared at a press event after the awards ceremony wearing Hong's jacket, and Hong held the trophy for her while she answered questions. "She put her arms around him when there were few people watching. They looked very affectionate", said an industry insider who was there.

The film is scheduled for release here in March.

"Kim Min-hee Wins Best Actress at Berlinale"
by HanCinema is licensed under a Creative Commons Attribution-Share Alike 3.0 Unported License.
Based on a work from this source