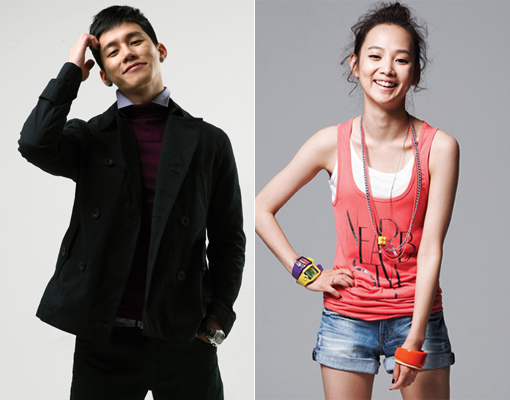 "On a late drunk night

I constantly think of you and I miss your face

I make do with

This message I am writing now..."

A love note on Twitter became their way of letting the world know about their love.

Musical star and actor Kim Moo-yul (30) and actress Yoon Seung-ah (29) turned out to be lovers.

Their secret relationship was revealed when Kim Moo-yul left a drunken message on Twitter. The 'mansion' note that he wrote to Yoon Seung-ah was captured by followers and openly published.

As this post was spread out amongst followers quickly, Kim Moo-yul deleted the post but it wasn't before it was already published to several online message boards. Their managements eventually mentioned, "They are just starting [to date]".

Kim Moo-yul is a popular musical star. He was in the movie "Arrow: The Ultimate Weapon" and the recent "A Muse".

Yoon Seung-ah is currently taking on the role of Han Ga-in's bodyguard in the MBC drama "The Sun and the Moon".

"Kim Moo-yul and Yoon Seung-ah caught red handed drunk?"
by HanCinema is licensed under a Creative Commons Attribution-Share Alike 3.0 Unported License.
Based on a work from this source