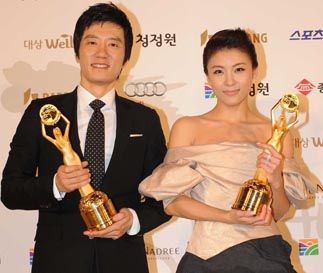 Closer to Heaven stars Kim Myung-min and Ha Ji-won will once again meet as a couple! This time, to memorialize their achievement as Best Lead Actor and Best Lead Actress, respectively, at last year's 30th Blue Dragon Film Awards.

The duo will participate at the 31th Blue Dragon Film Awards Handprint Ceremony which will take place on November 16 at 2 pm in CGV Yeongdongpo in Seoul. They will be joined by other winners of last year's awards - Kim Hae-sook (Best Supporting Actress for "Thirst"), Jin Goo (Best Supporting Actor for "Mother - 2009") and Park Bo-young (Best New Actress for "Speedy Scandal").

The 31st Blue Dragon Film Awards Night will take place on November 26 at the National Theater of Korea in Seoul.

"Kim Myung-min and Ha Ji-won to attend 31st Blue Dragon Handprint Ceremony "
by HanCinema is licensed under a Creative Commons Attribution-Share Alike 3.0 Unported License.
Based on a work from this source