Kim Rae-won Likes to Push Himself to the Limit 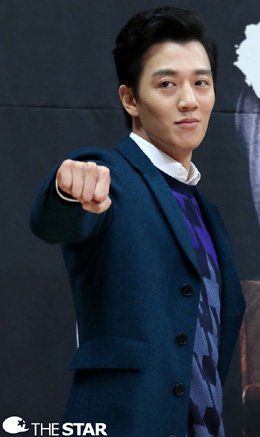 Actor Kim Rae-won is living as a prosecutor these days, as the star of the SBS TV series "Punch - Drama".

The drama revolves around Kim's character, who undergoes a transformation from a Machiavellian figure who'll do anything to achieve his goals into a seeker of justice for himself and his family, after learning that a brain tumor has left him with just two months to live. The show is very popular -- and keeping Kim busier than ever.

"In addition to this TV project, I've wrapped up a film project as well, so I'm quite busy. People tell me I don't look good. It's inevitable, because I'm up all night working at least three times a week", said Kim, adding that in fact he doesn't mind looking exhausted, as it "helps connect with the character".

Kim shed 15 kg to take on the role of the dying prosecutor, and often skips meals. The drama is full of implications and subtle nuances. "I often get into long discussions with other actors, like [veteran actor] Cho Jae-hyun, because I find it hard to understand [the show] myself a lot of the time".

Throughout his career, Kim has particularly excelled at portraying dark characters, from simple bullies to ferocious prosecutors. In his new film project, the action noir "Gangnam Blues", which was released last Thursday, Kim plays a vicious thug.

"I love playing villains because I can show a tougher side, and don't have to restrain myself. I like to push a character to the limit emotionally -- and often find it difficult to contain myself".

Since making his screen debut in 1996, Kim has gone on to enjoy a career spanning nearly 20 years. The rookie obsessed with looking cool has grown into a seasoned actor who strives to be true to his characters. "In the past, if I got a role as a gangster, I tried to emulate a gangster. But now, I try to become one".

Kim's worldview has changed, too. Not wanting to be typecast, his goal is to constantly explore diversity. "I don't want to be remembered from one particular side. I've done a lot of strong characters, so maybe I will take on a softer role. My real strength is romantic comedy, you know", Kim said.

"Kim Rae-won Likes to Push Himself to the Limit"
by HanCinema is licensed under a Creative Commons Attribution-Share Alike 3.0 Unported License.
Based on a work from this source