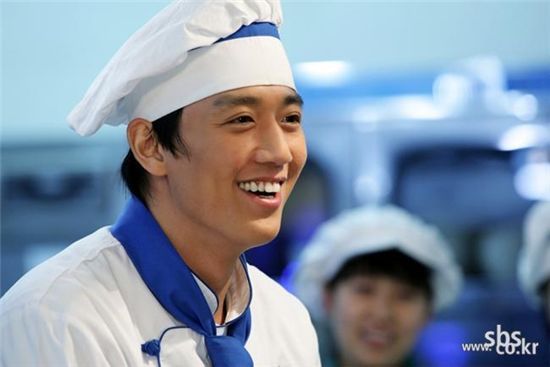 Kim Rae-won is a man of few words but also leads an honest and upright life. He goes to church every Sunday and will not answer to questions with more than a polite 'Yes' or a 'No'. But Kim, who exudes the prudence of someone in his 30s rather than the vigor of someone in his 20s, finally went back to being his age when asked about his favorite movies. The tone of his low-to-mid ranged voice heightened by a notch and his words failed to keep flowing. Even the staff expressed their astonishment, saying they have never seen him talk so much before.

Kim debuted with his role as a newbie at the broadcasting club of his high school in MBC drama "Me" and turned a college student through MBC's "Cat on the Roof" and film "My Little Bride". His character Kyung-min who bickered with his girlfriend in his rooftop room received the love of the entire nation after he plays Sang-min who becomes a new man after marrying a young bride. But this young man then jumped into a world full of violence and foul language in film "Mister Socrates" where he took on a double role as a policeman and gangster. It was his first attempt to break free from the loveable image he had portrayed and brought him so much fame, but the challenge he took on simply because his heart told him to, ended up becoming an experience which left a bitterness in his mouth. Kim at last became a man through "Sunflower" when he fiercely worked to portray Tae-shik who gets a short-lived taste at happiness but ends up becoming a miserable failure.

Kim has stood in front of the camera to show how he has transformed for 12 years now. He has gone from being a teenager to a college student, to a young man and into the real man he is today. Yet quite surprisingly, this man who received such proper breeding to make him the good man he is today, said his favorite movies are ones that make him laugh a lot. "I used to like quiet movies but I tend to look for light and cheerful movies these days". Here are the movies he watches when he yearns to break away from his life which is "serious 90 percent of the time".

1. Mario Puzo's "The Godfather"
1972 │ Francis Ford Coppola
"Honestly, this isn't a movie that puts you in a good mood. But I personally like it a lot so I'll enjoy watching it whenever. It's also very long and has two sequels but I watched through the entire series without stopping to sleep. I just couldn't halt mid-way. I started watching after lunch but it was after midnight by the time I had finished. (laugh) It was thrilling to even just get to see Marlon Brando and Al Pacino from when they were young because there was a youthful vigor to their acting. There's no room to feel depressed watching the movie because of the charisma they exude".

The man who tries his best to become strong in order to protect his family and gang, ends up losing the family he loves due to the ruthless life he lives, and the tragedy and revenge is carried on throughout the family line. The movie's simple plot contains every tragedy a human being could possibly experience. In "The Godfather III", one can see Francis Ford Coppola's daughter Sofia, also the young promising director, playing the role of Michael's (played by Al Pacino) daughter Mary.

2. "Ocean's Eleven"
2001 │ Steven Soderbergh
"Of course I had watched the movie before but director Park Hee-gon said it would help me to prepare for my new role. Plus Matt Damon is an actor I have always liked. He'll take the audience on a roller coaster ride. In "Ocean's Eleven", you know he'll succeed at pickpocketing just because of how the story develops but he will still make you so nervous... He was like that in "Bourne Ultimatum" too -- he is the best at making the audience feel anxious. And of course, at the same time, he manages to 'keep his cool'. (laugh)"

Everyone has gathered together -- a young thief, a retired thief, a womanizing gambler, a show-off conman and a clumsy pickpocket. Danny Ocean (played by George Clooney) and his friends get together to rob some of Las Vegas' top casinos, gaining possession of 150 million dollars under a perfectly concocted scheme in which each character takes on a specialized role. But the story does not end here. Ocean's clan and Terry Benedict (played by Andy Garcia) constantly seize the money from each other, turning the fight into one not about money but pride. The acting of great actors including Brad Pitt, George Clooney, Matt Damon and Andy Garcia is explosive in the film.

3. "Back To The Future"
1985 │ Robert Zemeckis
"I think I've watched the 'Back to the Future' series about 30 times. I had been into riding skateboards at the time this movie came out but the one Marty rode would fly! I would tell myself 'Wow, that board flies' and experienced a shock mixed with a sense of betrayal. (laugh) This movie fit perfectly with my creed to 'Watch movies with ease and enjoy life'. I'm an actor but become one of the audience when I'm watching movies. This was one of the movies I watched purely from the point-of-view as an audience".

Marty, who travels through time recklessly (played by Michael J. Fox) was teenagers' idol at the time the film showed. Everything he experienced was exciting, whether it was Marty traveling to the past on the DeLorean and ending up in a love triangle with his parents, or riding the hoverboard in the future, or traveling back to the Old West of 1885. And there was always Dr. Brown (Christopher Lloyd) who would save him from times of crisis so the viewer would feel reassured even while watching this dangerous adventure.

4. "21"
2008 │ Robert Luketic
"A group of math experts gamble at a casino in Las Vegas. There are 45 cards in a complete pack. Eight of those packs are used at casinos but they memorize every possible outcome and rob the casino with their professor. The picture moved rapidly too and I couldn't keep my eyes off till the very end where the unimaginable twist occurs. It's exciting because it's based on a true story".

The MIT blackjack team composed of one percent of the smartest students in school. Whether it be to pay tuition, simply for fun or to prove he is a genius, they decide to rob Las Vegas. They learn to count cards with Professor Micky (Kevin Spacey) and bring down a casino one by one. It is hard to believe the plot is based on a true story when looking at how the character count cards, something which is impossible for someone with the average brain to do.

5. "50 First Dates
2004 │ Peter Segal
It was fun yet moving and hilarious while sad. It's about a love where the guy bets his all on one woman. Could it be possible that such a man actually exists? People think romantic comedy films are just light but I think love stories are actually more difficult. Faking romantic feelings show more easily on screen. And stories about other people's love life is always fun for the third party. (laugh) It was really funny how Drew Barrymore would become surprised everyday by the twist at the end of 'Sixth Sense'."

Lucy's (played by Drew Barrymore) memory becomes blank almost everyday from a form of short-term memory loss yet Henry (Adam Sandler) loves her. Lucy does not remember her Henry's name and is always on the guard against him but also falls in love with him everyday. The movie will provide extraordinary dating tips for lovers who have been dating for a long time.