Kim Sae-ron, 'cute, bright and innocent' on the latest "High School - Love On" 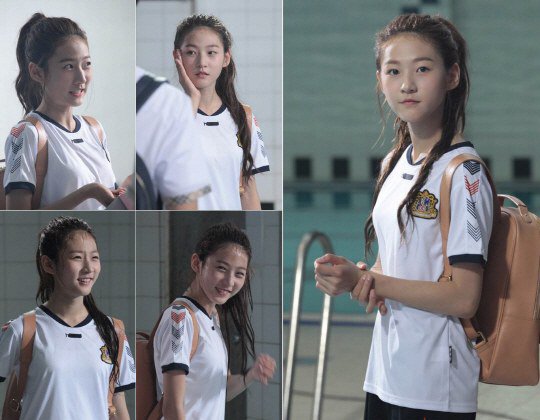 Kim Sae-ron stars in the KBS 2TV fantasy romance drama "High School - Love On" as a cheerful character named Lee Seul-bi. In the pictures revealed, Kim Sae-ron has many expressions on her face. She's wearing her school gym clothes and filming by the pool.

Lee Seul-bi is an angel full of curiosity who tries to adjust into the human world and live amongst the humans.

In the previous episode, Sin Woo-hyeon (Nam Woohyun) was bullied by Choi Jae-seok (Kim Young-jae) and then fell into the swimming pool, losing his mother's precious necklace. The picture was taken during the scene when Lee Seul-bi searches for Sin Woo-hyeon's lost necklace.

Kim Sae-ron had to put her head in the water and get wet. The way she's drying her wet hair with a towel shows her innocent side.

This week on "High School - Love On" reveals Woo-hyeon feeling anxious around Lee Seul-bi and feeling bothered by Seong-yeol's (Lee Sung-yeol) presence. Also, the school of Chunguk prepare a massive cheating plan during a test, but something goes wrong and Seol-yeol is put in danger.

"Kim Sae-ron, 'cute, bright and innocent' on the latest "High School - Love On""
by HanCinema is licensed under a Creative Commons Attribution-Share Alike 3.0 Unported License.
Based on a work from this source