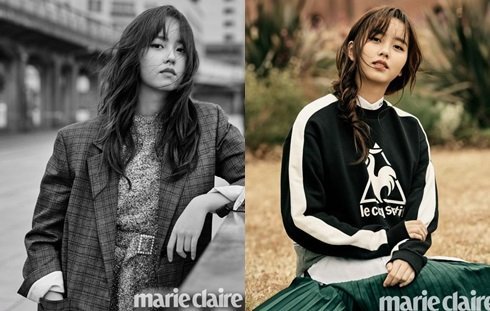 In the pictures, Kim So-hyun is wearing a checked coat and laced one-piece dresse in one and looks chic and feminine. In a long-sleeved shirt and long pleated skirts, she looks innocent.

Kim So-hyun is coming out with the drama "Radio Romance" next year when she turns twenty. She chose that drama to deliver the bright energy of a twenty-year-old.

Meanwhile, Kim So-hyun starred in the MBC drama "Ruler: Master of the Mask" with Yoo Seung-ho. The actress is also going to be in the Class of 2018 at the Hanyang University Department of Theater.

"Kim So-hyun Wants To Show the Bright Side of Being Twenty"
by HanCinema is licensed under a Creative Commons Attribution-Share Alike 3.0 Unported License.
Based on a work from this source