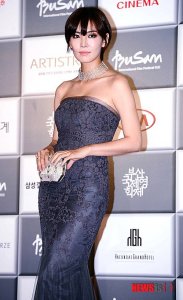 The actress Kim So-yeon is making a fresh start in her career by playing the role of a North Korean intelligence agent who loves her South Korean counterpart in the hit TV drama "IRIS". Since her debut in 1994, Kim had consistently played prim, cold-hearted characters.

She was hired literally off the street when she visited a broadcaster just for fun during her second year in middle school. At first, she was happy just to be in the entertainment business, but once her career got underway, the life of an actress proved fraught.

"I look older than my age, you know, so I was always cast in adult roles. But in fact, I was always the youngest in the cast. I could never really be at ease. I was intimidated and scared", she recalls. She frequently wondered whether acting was really for her. When acquaintances told her they wanted to become a TV celebrity, she tried to discourage them. "I thought working in the entertainment business is extremely difficult for people like me who don't have a natural flair for self-promotion", she says.

But just as she was getting fed up, the TV Drama "Gourmet" came to the rescue. For the first time since she started her career, she found that acting could be fun. "I'm very grateful to "Gourmet" for allowing me to think again what acting is". Then came "IRIS". And for the first time in years, she couldn't sleep because she wanted the part so badly.

She promised herself not to waste the opportunity. She cut her hair short and exercised every day to look more convincing as a well-trained spy, abandoning all ambition to look pretty. She read the script over and over, highlighter in hand. "I wanted the audience to see what was between the lines", she says. Her efforts paid off: thanks to her mesmerizing on-screen presence, the role kept growing from episode to episode, and now she has become one of the most important characters in "IRIS".

Kim says she is surprised every day by how complex and diverse the world of acting is and each scenes where actors put on different faces. "I think I've been able to do less than 1/10 of what's out there. Will I be able to do even half? I would be really happy if that happens".