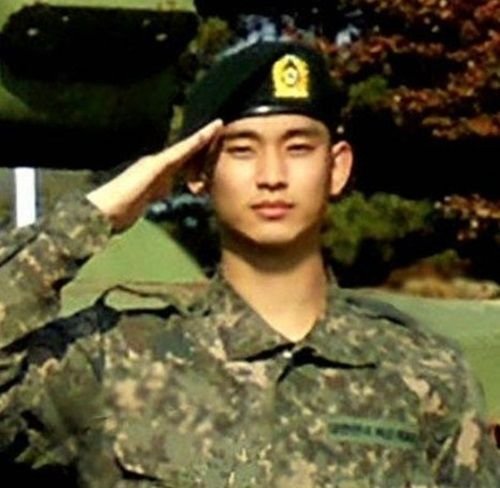 Kim Soo-hyun, who joined the Paju 1st Division training camp, completed the five-week basic military training on the 29th. During training, he received an excellence award from the division officer for a high standard of service as a model for others.

The search squadron searches and scouts in accordance with the scope of operation of superior units during war. Usually, candidates volunteer during training camp, but if there are not enough volunteers, more will be recruited. There are more soldiers being recruited than voluntary. Particularly, the 1st Division search squadron is spread widely around the front, making it a difficult area.

Kim Soo-hyun was diagnosed with heart disease during his childhood and received a grade 4 medical examination as a substitute service for public service in the physical examination of the Military Service in 2012. However, he made the effort to bring his health condition back to active duty standards and was approved. His actions are telling during a time when there are many issues regarding entertainers and their attitude towards military service.

Kim Soo-hyun started gaining fame in the SBS dramas "Will It Snow On Christmas" and "Giant", but he made it big with the KBS drama "Dream High". He rose to stardom with "The Sun and the Moon" and created international waves in "My Love from the Star". He also starred in movies "Thieves" and "Secretly and Greatly".

"Kim Soo-hyun Fulfills Military Duty Diligently"
by HanCinema is licensed under a Creative Commons Attribution-Share Alike 3.0 Unported License.
Based on a work from this source