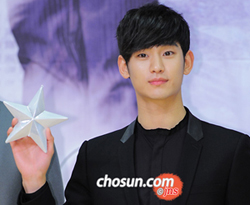 Actor Kim Soo-hyun is receiving much attention from advertisers after his latest films and TV projects have enjoyed continuous success.

After gaining some popularity through the TV soap "Dream High" in 2011, which features a number of teen stars, he made his movie debut with "The Thieves" in 2012, which drew over 10 million moviegoers. He followed this up with the hugely popular TV series "The Sun and the Moon" and another film, "Secretly and Greatly" that has been a hit among teenagers.

His popularity seems to know no bounds as he is currently appearing in the TV series "My Love from the Star", which has been garnering good ratings.

He is now the most in-demand advertising model, having signed over 15 endorsement deals. He models for brands ranging from outdoor clothing to cosmetics, beverages and snacks, and keeps getting offers, including some from overseas.

"Thanks to the continuous success in films and TV dramas, his popularity is soaring and he is now the most sought-after model. He doesn't have any rivals among his peers at the moment", said an advertising company staffer. Kim is also proving a huge hit in China and Japan.

"My Love from the Star", co-starring Jun Ji-hyun, currently airs on Wednesdays and Thursdays. It is a fantasy romance about a movie star and an alien