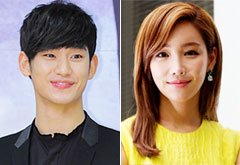 Kim Soo-hyun and Lee Yu-ri have been named most memorable actor and actress of the year.

In a poll of 1,703 people over 13 nationwide by Gallup Korea, Kim topped the list with 19.6 percent due to his performance in the hit drama "My Love from the Star".

Lee, who impressed viewers with her performance as a femme fatale in MBC weekend drama "Jang Bo-ri Is Here!" came second with 18.2 percent, beating Jun Ji-hyun (17.6 percent), who played opposite Kim in "My Love from the Star". Kim and Jeon enjoyed enormous popularity after the drama and became the most sought-after stars in advertising.

Lee was mostly favored by people in their 50s, while Jeon was more popular among those under 40.

Song Yoon-ah, who returned with MBC weekend drama "Mama - Nothing to Fear" after a six-year hiatus, ranked fourth with 6.1 percent, followed by Oh Yeon-seo (5.9 percent) who starred in "Jang Bo-ri Is Here!"