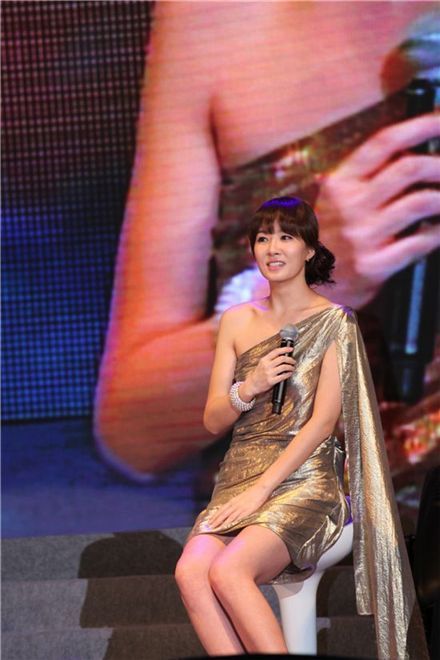 Hallyu star Kim Sun-ah held her first Taiwan fan meeting over the weekend which attracted some 2,000 fans, according to her agency Yedang Entertainment on Tuesday.

Yedang announced in a press release that the event, held at the Taiwan International Convention Center on June 12, was also attended by 50 leading Chinese media outlets including ELTATV and ETTV.

Kim kicked off the meet and greet with her rendition of Super Junior's "Sorry Sorry", delivered a special video message to her fans which she self made and sang pop song "Yesterday Once More" and her film "S Diary" soundtrack "Love Theme".

The actress also promoted SBS TV series "THE CITY HALL", where she plays a low-level government employee from the countryside who eventually becomes the mayor. which scored high ratings in Taiwan during its run earlier this year.

"I never imagined that so many people would come to the fan meeting. It's impossible to explain in words how thankful I am", the actress was quoted as saying, adding that she hopes to meet them again with new projects in the future.

Kim, who grew up in Japan and speaks fluent Japanese, shot to stardom throughout Asia with her comedic role in hit MBC TV series "My Name is Kim Sam-soon"(2005). She returned to the small screen three years later with "When It's at Night" and "THE CITY HALL".

Last year, the actress was voted "Favorite Korean Actress" in a viewers' survey conducted by Japanese cable channel LaLaTV, scoring 35 percent of the votes over other Hallyu stars including Choi Ji-woo, Lee Young-ae and Song Hye-kyo.

"Kim Sun-ah meets with 2,000 fans at Taiwan fan meeting"
by HanCinema is licensed under a Creative Commons Attribution-Share Alike 3.0 Unported License.
Based on a work from this source