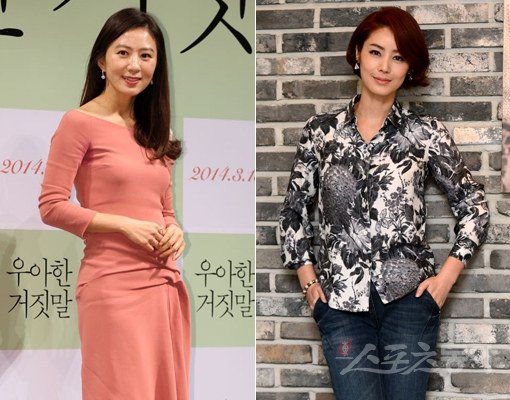 They are just as active as any actress in her twenties. The performance of these two actresses in their forties shines just by the challenge itself.

Kim Sung-ryung is currently modeling for cosmetics, health products and other brands as well. Experts say there's a clear composition between the two actresses.

It is possible Kim Sung-ryung will make it overseas too. She was in Cannes in mid-May with the movie "The Target" and met with the biggest film directing company in France. Her English profile helped her a lot in getting all the attention that she did there.

If Kim Sung-ryung is new at this, Kim Hee-ae has been at this for a long time. She's expanded her working territory to TV shows and films and will make another movie called "C'est Si Bon". This is her first movie since the 1993 movie "101st Proposal".

Kim Hee-ae is known as the only actress past her 40s who can still do a mellow drama. Therefore in "C'est Si Bon", she's going to be a romantic lover of Kim Yun-seok's.

These actresses activities are breaking the stereotype. Kim Hee-ae appeared in "Infinity Challenge" and didn't refrain from breaking down and Kim Sung-ryung refused all drama offers and decided to go theater instead and play three roles at once.

Debuted in 1983 with "The First Day In Twenty Years"

Starred in "A Wife's Credentials", "Precious Family", "My Man's Woman" and recently "Thread of Lies" and more

First Runner up in the 1988 Miss Korea Contest

Started acting with the 1991 movie "The Dragon's Nail"

Starred in dramas, "THE CHASER - Drama", "Yawang", "The Heirs" and "The Fatal Encounter"

"Kim Sung-ryung vs. Kim Hee-ae"
by HanCinema is licensed under a Creative Commons Attribution-Share Alike 3.0 Unported License.
Based on a work from this source